This is a page turner with twists to the end!

The Former Assassin
by Nikki Stern 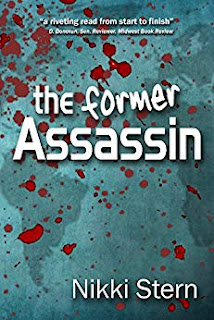 Susan Foster wants to retire. Her boss wants her dead.
After decades as Victor Kemp’s off-the books killer, Suzanne finally quits. Not until five years later does Kemp discover how thoroughly she’s deceived him. Determined to punish her, he tracks her to Wales to watch her die. Instead, he walks into a trap.
Believing themselves safe at last, Suzanne and her family relocate to London, where she hopes to find the peace that has eluded her for so long. Her son is engaged to a nobleman’s daughter; her husband has a good job with British Intelligence. Yet she still struggles with restless dreams and the premonition that her nemesis has survived.
He has: Kemp, though severely injured, is rebuilding his empire and plotting revenge. He’s prepared to risk everything to end the former assassin. He may not be the only one.
Suzanne has no choice: to protect those she loves, she will be forced to kill again. Assassins, it seems, can never retire.


Review:
Suzanne took a rash act of revenge over a friend in college. That one mistake put her under the thumb of a vicious, controlling business tycoon. Victor Kemp hired Susan as a security chief but more importantly as his off the books assassin. When Susan unexpectedly falls in love it is a threat to Kemp’s control. Rather than allow her to leave his employ and have a family, Kemp will eliminate them.

Susan continues for decades in reluctant and intimidated service to Kemp. Finally, she walks out choosing to go into hiding to thwart Kemp’s rule that no one retires from his organization.

Kemp is obsessed with continuing his control over Susan, even if it means killing her.
Five years after she walked out Kemp finds Susan and attempts to kill her. Instead he and his cohorts, including his eldest son, are eliminated by a surprise trap. But Suzanne can’t shake the feeling that she and her family are still in danger. Her son is about to marry a nobleman’s daughter and she wants to insure they can marry and live safely.

She is right to listen to her gut. Kemp has survived and built a new empire as he plans his ultimate revenge against Susan. Fortunately, Suzanne is no longer rash, nor alone. She now has family members who are skilled and prepared to back her up…knowing they can’t stop her from doing what she feels she must to protect her family.

Susan/Suzanne is a complicated character. She has great confidence and poise in some things but is vulnerable in her aloneness and self-doubts. Ms. Stern builds the suspense wonderfully. Just as the reader thinks a situation is resolved, a twist moves the characters to the next level. The last third of the book had me turning pages to discover what happens. And there are twists all the way to the end.

Well done! I recommend this to readers who like a well plotted suspense with strong characters.


Source: Partners in Crime. It qualifies as part of my 2018 Alphabet Challenge.

"An explosive page-turner which owes its momentum to it two well-drawn opponents and a conflict that goes beyond good-vs.-evil.” ~IndieReader, Four Star review
"Later turns in the smashing final act come at a searing pace." ~ Kirkus Reviews
"Keeps readers guessing the outcome right up to its conclusion." ~D. Donovan Midwest Book Review

Today is not a good day to die.

No day is, not really. We humans are hard-wired to survive. By most standards, though, this morning is exceptional. The weather is balmy, even for May. The fierce winds that often pound the Welsh coastline have remained offshore. Purple heather blankets the emerald cliffs that encircle Bristol Bay. Small breakers gently lap the shoreline and wash the sand clean of debris. The water sparkles in the sunlight. Shades of azure and aquamarine yield to cyan and lapis further out. In the distance, the sea meets a cerulean sky just where the earth curves. No slate clouds gather at the horizon. All is calm.

Nothing suggested that today I would find myself on a bench in one of the most breathtaking spots in the world with a gun to my head, held by a predator who speaks just two words: “Don’t move.” 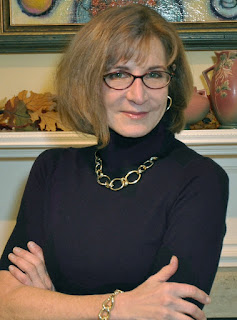 Nikki is the author of two works of non-fiction: HOPE IN SMALL DOSES, a 2015 Eric Hoffer finalist for books that provoke, inspire and redirect thought, and BECAUSE I SAY SO: MORAL AUTHORITY'S DANGEROUS APPEAL, as well as dozens of short stories. She is co-author on the Cafe Noir interactive murder mystery series, published by Samuel French. Nikki's suspense novel, THE FORMER ASSASSIN has garnered strong reviews, including a four-star rating from Indie Reader. She's working on a mystery/sci-fi series starring an unorthodox crime fighter named Samantha Tate. When she's not writing about strong complex women, Nikki is working with several non-profits, taking Pilates classes, and attending to the needs of her dog, Molly.

Visit these other great hosts on this tour for more great reviews, interviews, guest posts, and giveaways!

This is a rafflecopter giveaway hosted by Partners in Crime Virtual Book Tours for Nikki Stern. There will be 2 winners of one (1) Amazon.com Gift Card. The giveaway begins on August 1, 2018 and runs through September 1, 2018. Void where prohibited.


Posted by Martha Eskuchen at 5:30 AM