This left me with mixed feelings. It is entertaining with a few positives, but not enough to make me continue the series. 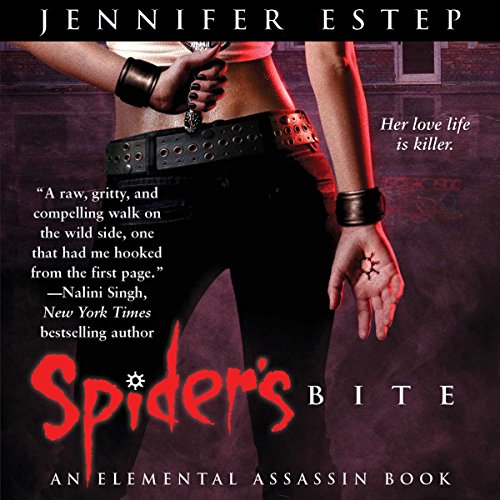 Publisher's Summary
They call me the Spider. I'm the most feared assassin in the South -- when I'm not busy at the Pork Pit cooking up the best barbecue in Ashland. As a Stone elemental, I can hear everything from the whispers of the gravel beneath my feet to the vibrations of the soaring Appalachian Mountains above me. My Ice magic also comes in handy for making the occasional knife. But I don't use my powers on the job unless I absolutely have to. Call it professional pride.
Now that a ruthless Air elemental has double-crossed me and killed my handler, I'm out for revenge. And I'll exterminate anyone who gets in my way -- good or bad. I may look hot, but I'm still one of the bad guys. Which is why I'm in trouble, since irresistibly rugged Detective Donovan Caine has agreed to help me. The last thing this coldhearted killer needs when I'm battling a magic more powerful than my own is a sexy distraction... especially when Donovan wants me dead just as much as the enemy.
©2010 Jennifer Estep (P)2010 Audible, Inc.


Review:
Gin is better known as Spider, a feared assassin. Gin has been honing her skills since she was rescued off the streets by her mentor/handler, Fletcher. Gin is a stone elemental with some Ice magic. Although she has worked with her magic she prefers to rely on her physical dexterity and weapons, particularly knives.

Fletcher has an assignment for Gin even though she is asking for a break. He assures her that this assignment could be the final one and then she can retire. Instead, the job turns into a double cross with the murder framed back to Spider so the evidence can be eliminated with the target. As Spider tries to extricate herself from the job, she comes face to face with Donovan Caine, a hero type detective, whose partner Spider killed.

Fletcher is brutally tortured and slain and Gin has to save his son, Finn, before the Air elemental gets to him. Although Gin is on the run as a murder suspect, she soon has a surprising ally on her side. And the client who hired her has underestimated Spider’s skills and determination.

There is strong action as Spider takes down opponents, usually quickly, leaving bodies in her wake. I liked the premise of the fantasy and the elemental magic skills. I liked the secondary characters -- the older mentor, Fletcher, his young, almost flamboyant son, Finn, and the betrayed cop, Caine, as well as other friends who help Gin when she returns with injuries. I was glad for Caine as so many of the other cops were corrupt, child molesters.

Sadly, I couldn’t embrace Gin/Spider as a character. For a skilled assassin she makes careless mistakes and poor decisions. There are vulnerabilities and caring of those she considers family, but I think I found her just a tad too harsh and cold. That fits her assassin nature but doesn’t make for a warm, empathetic character. I also didn’t care for the sexual aspects of the story. It is mostly primal, pushy lust which is not my thing.

There is unnecessary repetition of trite phrases – descriptions of eyes and body shapes. I did find some humor in the repetitious “sloppy, sloppy, sloppy” and “MMmm” comments. Although the package didn’t quite grab me, there are many positive reviews. I think many urban fantasy fans would enjoy the series. Take a peek at the “inside” sample or listen to the audio sample to see what you think.

Audio Notes: Lauren Fortgang does an interesting job with the narration. I actually like her accents and drawls that fit the female character. I didn’t care for it as much with the ‘rugged detective’ who sounded growly or druggy most of the time. I can’t say the narration hurt the story but it didn’t help make it for me either.

~~~~~~~~~~~~~~~~
If anyone has read this series I would be curious to know if the writing got more mature as the series continued. What kept you interested?