#NetGalley Book Review: Rise of the Fallen: Wars of the Realm, Book 2 by Chuck Black

This is a fascinating tale from the perspective of a warrior angel.
Rise of the Fallen: Wars of the Realm, Book 2
by Chuck Black 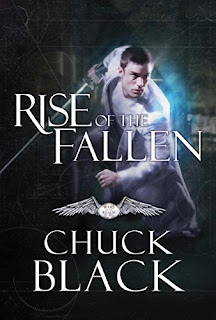 A six thousand year war rages and now the demonic Fallen are coming for him—the one man shrouded in mystery. Only Validus stands in their way.
Validus is the last and least of God’s angels, but he’s seen much across the millennia since his creation. Empires have risen and fallen as angelic and demonic forces battle in a raging war that will determine humanity's fate – and the fate of his defeated brothers.
Eventually called to be an earth-bound warrior, Validus rises to a position of power and respect, commanding legions of angels through impossible battles and overwhelming odds. But when orders arrive from the Creator's most elite Messenger, he finds himself suddenly demoted to a task of apparent insignificance considering the fierce war they are waging against the demonic Fallen – the covert protection of one unbelieving man.
Validus soon finds himself on a mission that will push him beyond his abilities as he battles to protect Drew Carter, for the Fallen are coming for him. Legions of them.
As Validus races against time to discover why Drew is so important to humanity's survival, can he stand between Drew and all who would destroy him?


Review:
The first book, The Cloak of Light, follows the growth of Drew Carter, a good young man who lost his father as a youth and later is injured during a lab accident. Initially it was thought that he was blind, but he recovered his sight and can see between realms. He thinks he is seeing aliens, not realizing that he is seeing demons and angels.

Validus is a warrior angel who has now been reassigned to guard the human, Drew Carter. Initially Validus thinks this is a demotion as he doesn’t know why Drew is important. The man isn’t even a believer in Christ, although he has a close female friend who is.As Validus and his charge become pursued by the 'fallen' he begins to recognize the urgency of this assignment.

The wonderful thing about this, book two, is it tells the perspective of history, from the beginning of creation, including the fall of Lucifer, many battles over the years and even the birth of Jesus, all through the eyes of Validus. Chuck Black does a remarkable, imaginative job developing very believable scenes consistent with Biblical and historical stories. I enjoyed the character of Validus and his friends as they interact with the humans of each event. There is exciting, detail in the scenes, including blow by blow descriptions in the human and spiritual battles.

The book also has a strong, thought provoking discussion guide. I enjoyed this book two even more than book one and look forward book three. I recommend this to readers who enjoy action and enjoy stories of the angelic realm.


Source: NetGalley 2017. This qualifies for 2018 NetGalley, TBR and Alphabet Challenges.
Posted by Martha Eskuchen at 8:54 PM