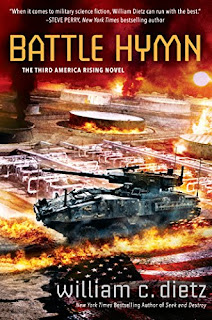 From the New York Times bestselling author of the Legion of the Damned® novels comes the final volume in the postapocalyptic military science fiction trilogy about America warring with itself and the people trying to keep it together...
The Second Civil War continues to rage as Union president Samuel T. Sloan battles to keep America whole and, more than that, to restore the country to its former greatness.
"Wanted Dead or Alive." Following a fateful battle between Union Army major Robin "Mac" Macintyre and her sister, the New Confederacy places a price on Mac's head, and bounty hunters are on her trail.
But there's work to be done, and Mac is determined to help Sloan reunify the country by freeing hundreds of Union POWs from appalling conditions in Mexico and capturing a strategic oil reserve that lies deep inside Confederate territory.
However, to truly have peace it will be necessary to capture or kill the New Confederacy's leadership, and that includes Mac's father, General Bo Macintyre.


Review:
At the end of book two Mac and her sister had a fateful confrontation. The New Confederacy, by the command of her own father, has placed a price on Mac’s head making her the target of bounty hunters. Many of Mac’s original platoon have been lost so there is a steady stream of new troops coming in. Some of those under her command have Confederate sympathies, or are just greedy, making it hard to know whom she can trust.

Mac’s new commander views Mac as lucky and getting favoritism as the suspected ‘lover’ of Union President, Sam Sloan. Mac gets a new team together and has to prove her worth through a treacherous rescue of abused POWs held in a Mexican prison. More losses occur but the battles don’t stop.
Mac and her Marauders are assigned to capture a strategic oil reserve within Confederacy territory. The odds aren’t good and get worse when unexpected Mexican troops begin to swarm from the south. The Confederacy leadership has made a devil’s bargain with Mexican leaders in an effort to turn the tide of their losses.

President Sloan struggles to prevail as the engagements heat up and the Union faces fresh masses of troops arriving from Mexico. A ravaging hurricane hitting New Orleans adds to the confusion and the tense situation. A daring plan is implemented to take down the leaders of the New Confederacy hoping to stop the confrontation once and for all.

Between battles, corruption and betrayal are revealed. There are a few moments for Sloan and Mac to come together but they can’t let their guard down as enemies continue to stalk them.

This final book in the America Rising series packs a lot of action and some inconsistencies. There are some early bounty attacks on Mac, but those threats pretty much stop in spite of her notoriety and visibility. Some chilling attack plans are discussed and then never mentioned again. This was a good thing, but it seemed strange that it was introduced as a possibility only to never be revisited.

As in the prior books some of the scenes are implausible and have to be accepted as just entertainment. In spite of these inconsistencies, I enjoyed the steady action and suspense that continues to the end. I liked the teasing relationship between Sloan and Mac even in their brief encounters. This series was entertaining and the ending was a satisfactory conclusion.


Source: Publisher through NetGalley. This qualifies for my 2018TBR, NetGalley and Alphabet Challenges.

My Review of Book One: Into the Guns (America Rising) by William C. Diet, rated 4.0

Note: I think this series is overpriced in the Kindle format and, IMHO, that may limit readership.
The Audible prices might be acceptable but with so many choices of books available it seems strange to overprice a series that may be entertaining but isn’t really stellar.
Posted by Martha Eskuchen at 5:30 AM