#NetGalley Review: All Our Wrong Todays by Elan Mastai

Time travel paradox: What would you do if your actions changed your own time line?
All Our Wrong Todays: A Novel
by Elan Mastai 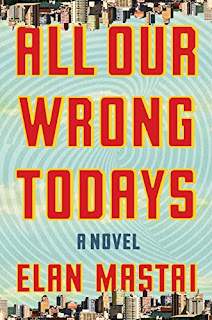 Elan Mastai's acclaimed debut novel is a story of friendship and family, of unexpected journeys and alternate paths, and of love in its multitude of forms.
It's 2016, and in Tom Barren's world, technology has solved all of humanity's problems—there's no war, no poverty, no under-ripe avocadoes. Unfortunately, Tom isn't happy. He's lost the girl of his dreams. And what do you do when you're heartbroken and have a time machine? Something stupid.
Finding himself stranded in a terrible alternate reality—which we immediately recognize as our 2016—Tom is desperate to fix his mistake and go home. Right up until the moment he discovers wonderfully unexpected versions of his family, his career, and the woman who may just be the love of his life.
Now Tom faces an impossible choice. Go back to his perfect but loveless life. Or stay in our messy reality with a soulmate by his side. His search for the answer takes him across continents and timelines in a quest to figure out, finally, who he really is and what his future—our future—is supposed to be.
Filled with humor and heart and packed with insight, intelligence, and mind-bending invention, All Our Wrong Todays is a powerful and moving story of life, loss, and love.


Review:
Tom Barren’s world of 2016 is a future that looks like the Jettson’s TV show with sleek buildings, robotic maids and hovercrafts. It is full of technology, (most) everyone is happy and (most) people finds their work in a field of entertainment or exploration. Tom’s parents are a strange, aloof couple and, sadly, Tom doesn’t have the focus or drive to keep a job, much less a career. He is pretty much a second rate loser who fantasizes about women and currently about one particular woman, Penelope, a brilliant young woman who is now the lead chrononaut on his father’s time travel team. Tom has been given the position of her understudy due to a freak accident four months earlier and a moment of pity from his father.

Tom’s father is a famous scientist who is about to run the first time travel experiment. His calculations are keyed to a specific time and energy signature in 1965 when another scientist unveiled the experiment that created endless free, clean energy which allowed the world to become Tom’s remarkable world in 2016.

The night before the trip in time Tom manages to mess up life again – for himself, Penelope and his father. In an extreme moment, Tom plunges himself into the time machine without being fully prepared – as usual. His arrival is partially successful but results in a glitch that changes time.

Tom awakens in a new 2016 as John Barren who has had a fall at a construction site. John is everything that Tom wasn’t. He is a driven, successful, wealthy architect with loving parents and a bright, sassy sister. No one believes Tom/John’s story of another timeline even as he is determined to set things right. But then he meets a wonderful bookstore owner, Penny who could be the love of his life. This would be a beautiful life, but it isn’t Tom’s life.

Tom/John must search out a way to proof his craziness, especially to Penny. That sets him across continents and times where he discovers that messing with time isn’t always a good thing.

Tom is somewhat of a shallow, miserable character making the beginning of the story slow and hard to get into. But once he travels back in time things become complex and interesting…and Tom even matures along the way. The story is more about the consequences of time travel than the travel itself, although there is some of that too in an interesting span.

I enjoy the paradox of time travel and this story is fun once it gets going. I recommend this to sci fi fans who enjoy the issues raised by time travel.


Source: NetGalley. This qualifies for 2018TBR, 2018NetGalley, 2018Alphabet Challenges and a book set in Canada for I Spy Reading Challenge.
Posted by Martha Eskuchen at 11:28 PM