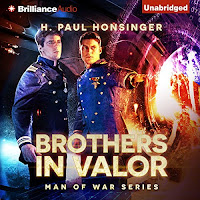 Publisher's Summary
Sometimes Captain Max Robichaux fights by the book - and sometimes he throws the book away. This makes him one of the Union Space Navy's rising stars. It's also what has kept him and his green crew alive...thus far.
When Max and his ship - the twenty-fourth-century space destroyer USS Cumberland - are boxed in by eight enemy battleships, the odds are against them at a million to one. It takes all their skill and guts just to escape...and surviving won't get easier. Sent on a covert mission behind enemy lines, Max and his crew are poised to strike a blow so hard that, if successful, it could turn the tide of the war. But if they fail, it will cost them their lives...and the lives of every human in the galaxy.
©2015 H. Paul Honsinger (P)2015 Brilliance Audio, all rights reserved


Review:
Max Robichaux is a young space Captain on the space destroyer USS Cumberland, a ship that was previously mocked for its losses. The crew knew more about polishing the rivets than fighting the enemy of the Union until Max became their Captain. Since then they have faced danger and come out alive through Max’s quick, sometimes out of the box thinking.

The action starts as Max has to help the ship and crew escape from overwhelming odds. He will have to pull a rabbit out his hat – or try a trick that has never been done- to succeed.

Next the Cumberland is sent on a covert mission that takes them into the heart of the enemy. There is initial conflict as the other Captain he is paired with is a seasoned man who doesn’t want to take orders from Max. Once that conflict is resolved, they proceed with a daring plan. Although it means they may end up stranded with the enemy they have to take the risk to capture a key leader to have a chance of stopping the war.

I loved the non-stop action and danger in this story. Max is a great character who comes up with ingenious tactical solutions and is willing to trust his crew to know their jobs and make effective suggestions. Dr. Sahin, chief medical officer and special ambassador, adds good humor with his side comments and views from a nonmilitary aspect. I like the other crew ‘family’ and shared in their emotions.

I am only sorry that Mr. Honsinger has no other books for me to get. I do recommend this series to readers who enjoy action packed military space battles.

Audio Notes: As with Book 2, Ray Chase does a great job with the narration. He captures the intensity, the dry wit and the quirks of the characters. The listening experience enhanced the entertainment of the story.


Source: Audible TBR, 2016 Sale. This qualifies for my 2018TBR, Audiobook and Alphabet Challenges.