This introduced new characters to help Cinder face her destiny. The story/series is engaging.
Scarlet
The Lunar Chronicles, Book 2
By: Marissa Meyer
Narrated by: Rebecca Soler 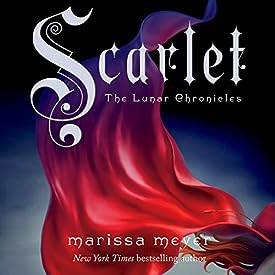 Publisher's Summary
Cinder, the cyborg mechanic, returns in the second thrilling installment of the best-selling Lunar Chronicles. She's trying to break out of prison - even though if she succeeds, she'll be the Commonwealth's most wanted fugitive. Halfway around the world, Scarlet Benoit's grandmother is missing. It turns out there are many things Scarlet doesn't know about her grandmother or the grave danger she has lived in her whole life.
When Scarlet encounters Wolf, a street fighter who may have information as to her grandmother's whereabouts, she is loath to trust this stranger, but is inexplicably drawn to him, and he to her. As Scarlet and Wolf unravel one mystery, they encounter another when they meet Cinder. Now, all of them must stay one step ahead of the vicious Lunar Queen Levana, who will do anything for the handsome Prince Kai to become her husband, her king, her prisoner.
©2013 Marissa Meyer (P)2013 Macmillan Audio


Review:
Scarlet, named for her red hair, is desperately searching for her missing grandmother. The authorities are inclined to think grandmother has just gone off of her free will, but Scarlet is convinced she wouldn’t go without leaving some word. Scarlet continues to run her usual errands but she is greatly frustrated. She happens to run into a young man on the streets, a street fighter who seems keenly interested in her. Scarlet suspects she should be afraid of Wolf but she is oddly drawn to him.

Wolf shows up at Scarlet’s farm as she is arguing with her alcoholic father who is tearing the home apart. She had not seen her father for years and now it appears he has knowledge about her missing grandmother. Her father has clearly been tortured and Scarlet fears for her grandmother.

Wolf convinces Scarlet to let him help her go to Paris seeking her grandmother who has been taken by a pack group that Wolf claims to have left. He tries to talk Scarlet out of it noting how dangerous it will be but she will do whatever it takes to get to her grandmother.

Meanwhile Cinder escapes from prison and picks up another prisoner, “Captain” Thorne. He claims to have an airship they can use to escape authorities. The two are at odds but trouble makes strange companions. Iko adds snark when Cinder brings her back as part of the airship computer.

Evil, awful, Queen LeVana is tightening the trap around Prince Kai as her fury rages at Cinder’s escape. Kai secretly roots for Cinder, not realizing how important she is, even perhaps to his own survival.

I enjoyed the new characters and the tension between Scarlet and Wolf. I liked how the author moves them along with danger and suspense until they meet Cinder late in the book. The mysteries and dangers continue to surround the characters and I will keep reading or listening to learn if Cinder is willing to do what it takes to challenge the Lunar Queen.

Audio Notes: Rebecca Soler does a good job with the narration. She infuses great emotion into the characters, even a trapped Iko. The energy helps carry the story along at a good pace, although at times the voices are too intense. Still, I enjoyed the audio experience and will probably look to get book three, Cress, on audio.