The second half of this alternate history thriller is non stop action. 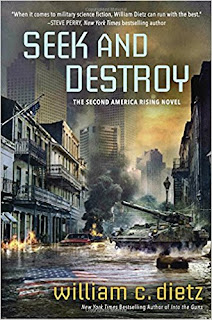 
From the New York Times bestselling author of the Legion of the Damned® novels and the Mutant Files series comes the second novel in a postapocalyptic military science fiction series about America struggling to overcome a natural disaster but starting a second civil war…
As people fight to survive the aftereffects of more than a dozen meteor strikes, a group of wealthy individuals conspires to rebuild the United States as a corporate entity called the New Confederacy, where the bottom line is law. As a second civil war rages, with families fighting against families on opposite sides, Union president Samuel T. Sloan battles to keep the country whole.
To help in the fight for unity, Union Army captain Robin “Mac” Macintyre and her crew of Stryker vehicles are sent after the ruthless “warlord of warlords,” an ex–Green Beret who rules a large swath of the West. But defeating him will be even more difficult than she thought. The warlord is receiving military assistance from Mac’s sister—and rival—Confederate major Victoria Macintyre. And when the siblings come together in the war-torn streets of New Orleans, only one of them will walk away.


Review:
This second book continues to follow the three primary characters, Mac with her Marauder Stryker crew, Union president Sloan, and Mac’s Confederate enemy, her sister Victoria. Mac and her crew are sent on one special assignment after another. First they have to take out a ruthless warlord an ex-military man holding sway in Wyoming. Next they rescue a downed pilot behind enemy lines. A twist occurs but it isn’t long before Mac is back in action helping to snatch a Confederate official out of Texas. And finally the team must lead a flotilla, fighting off Confederate forces, to clear obstructions and open a supply way down the Mississippi.

Meanwhile Sloan is busy trying to rebuild the country, making steps to gain support for reelection and managing the overall war picture. He participates in a few military manuevers himself maintaining his tag as "the fighting President). He’d like to see a little of Robin (Mac) in between stops but rumors could be harmful.

Victoria is busy giving aid to the warlord that Mac faces, planning ways to assassinate Mac, and finally sneaking in to sabotage New Orleans after the Union has captured it. Mac and Victoria have several nearby passes until they finally meet face to face.

I was already engaged by the characters and setting from book one. Mr. Dietz continues to show great skill in building a plausible post catastrophic America that is the turmoil of civil war. There is no way to go through battle after battle without experiencing losses but these characters must push through to pursue their respective agendas, or in Mac’s case, to fulfill her duty as a leader protecting her team as they follow orders of their superiors. This story gave me an appreciation for battle tactics and how a skilled leader can win against forces that are sometimes better equipped. The story, especially the second half, is full of trouble, threats, treachery, twists, terror and trauma. I also recognize how each battle or encounter can turn on any momentary event – stroke of luck some might say.

I really enjoyed this second book, even more than book one. I was very glad to have book three to jump into. I highly recommend this series to readers who like military action with a touch of political intrigue and a dash of romance.

Source: Publisher in preparation of reading Book 3 through NetGalley. This qualifies for 2018 TBR and Alphabet Challenges.
My Review of Book One: Into the Guns (America Rising) by William C. Dietz
Posted by Martha Eskuchen at 10:08 PM