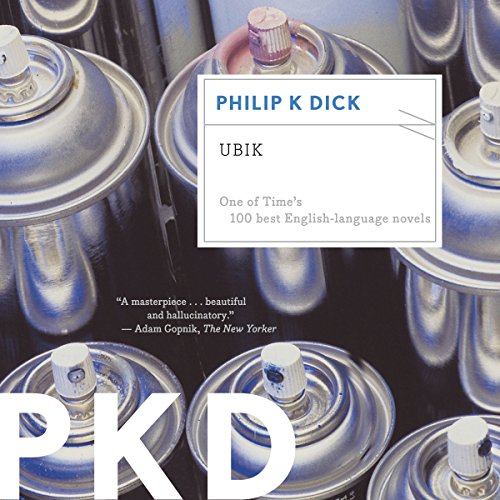 Publisher's Summary
A mind-bending, classic Philip K. Dick novel about the perception of reality.
Named as one of Time's 100 best books.
Glen Runciter runs a lucrative business - deploying his teams of anti-psychics to corporate clients who want privacy and security from psychic spies. But when he and his top team are ambushed by a rival, he is gravely injured and placed in "half-life," a dreamlike state of suspended animation. Soon, though, the surviving members of the team begin experiencing some strange phenomena, such as Runciter's face appearing on coins and the world seeming to move backward in time. As consumables deteriorate and technology gets ever more primitive, the group needs to find out what is causing the shifts and what a mysterious product called Ubik has to do with it all.
©1969 Philip K. Dick (P)2014 Brilliance Audio, all rights reserved.


Review:
Joe Chip is sort of an everyday guy who works a special job for Glen Runciter’s security business. Joe operates the test systems to determine the level of skills of anti-psychics who are hired by Runciter’s firm. Joe has brought a new employee to be hired who has a unique but dangerous skill.

In the world where Runciter and Chip live, people can be put into a suspended “half-life” right before they die. Runciter’s wife and partner, Ella, is in such a state. Runciter meets with Ella to get her advice when troubles arise, like facing the challenge of a rival company.

The rival manages an ambush against the team that puts Runciter into “half-life” and leaves the team in shock. Soon members of the team begin to die and the world around them twists with Joe seeing strange messages that seem to be coming from Runciter and in a product called Ubik. It isn’t clear what the product is as it changes from one chapter to the next, but it is always described as “safe when used as directed”.

Joe realizes that the team members are dying when they become separated. He does his best to pull them together but the world around them is deteriorating and the means of travel are retrograding from teleporting to planes to trains to automobiles. This makes it more difficult to keep the group together while they try to decipher the clues.

I enjoyed the rather crazy events, the clues and twists. It can be confusing but if you stick with it the twists become understandable and the ending pulled together. This is the type of futuristic, sci fi irony I have learned to enjoy in the vintage stories. I recommend this to sci fi fans.

Audio Notes: Luke Daniels does a fine job with the voices managing the various nuances of the characters. He captures the sardonic irony of the story. I am glad I listened to this in audio.


Source: Audible Daily Deal 2017. I listened to this for Vintage Sci Fi. This qualifies for 2018 TBR, Audiobook and Alphabet challenges.
Posted by Martha Eskuchen at 9:18 PM