This is a delightful sci fi dystopia – unique in my reading world!
The Wrong Unit: A Novel
by Rob Dircks 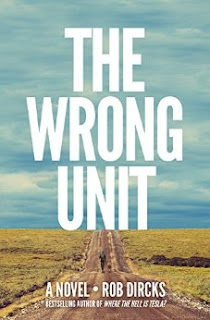 I DON’T KNOW WHAT THE HUMANS ARE SO CRANKY ABOUT. Their enclosures are large, they ingest over a thousand calories per day, and they’re allowed to mate. Plus, they have me.
An Autonomous Servile Unit, housed in a mobile/bipedal chassis. I do my job well: keep the humans healthy and happy.
“Hey you.”
Heyoo. That’s my name, I suppose. It’s easier for the humans to remember than 413s98-itr8. I guess I’ve gotten used to it.


Review:
Heyoo is the name of a standard robotic farmer helper unit in 'the sanctuary'. The humans often tease him and he got his name because they always call him “Hey You”. He is in for repair of a circular difficulty when a rebellion takes place. It is hard for the computers to understand why humans would want to rebel against The CORE – after all the computer system provides housing, food, work and control all aspects of the human lives so that they can always be happy.

The humans placed something in Heyoo's chest and sent him away in a transporter that he didn’t previously know existed. Before they launch him out he sees the human look at him and say "he's the Wrong Unit!" Heyoo soon discovers that the package he is carrying is a human infant that he quickly names “Wah”! He also has half of a map. Heyoo has no idea how to take care of a messy, hungry infant. But Heyoo has determination to prove he can do the job! He spends the next thirteen years journeying with the map and helping Wah grow as the sole free human in the world. Eventually they uncover other hidden humans and gather a team to advance the release of the humans from 'the sanctuary'.

This dystopian story is truly delightful! It is told in first person by Heyoo. It charmingly moves with his changes as a farmer, a wanderer and even a pirate unit. Over the years of their journey Heyoo discovers the joys of human freedom and the inexpressible enthusiasm of a growing child exploring the wide world with his “Dad” as his best – well only for a long time – friend. Their interaction is adorable and evokes all sorts of human emotions: fear, joy, pain, sorrow, and love. And of course, the story reveals the irony of a perfect utopia world that removes the freedom of choice from the humans. The ending brought tears to my eyes! This is fun and definitely worth reading. I want to read more by Mr. Dircks.


I received this from the publisher through NetGalley. It qualifies for my NetGalley Challenge and was a selection for November Sci Fi – even though I didn’t get it posted then.
Posted by Martha Eskuchen at 9:42 PM