This is quick, fun entertainment; smiles for $.99! 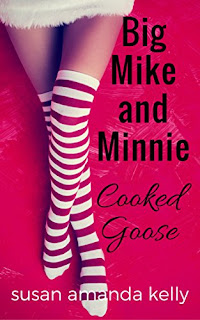 Mistletoe mayhem! Cooked Goose is a hilarious holiday love story filled with sizzle, sugar, and sass...
“Your father called me. He invited me for Christmas. I have a ticket for the same flight as you. Tonight.”
With those words, Big Mike sucked the oxygen out of the room. Minnie intended her father would meet her new man, Big Mike… eventually. Minnie wanted to give Daddy time to get used to the idea that his 'little girl' is embroiled in a serious relationship. A few decades, perhaps. Because Daddy’s not your run-of-the-mill protective father - he's a criminal. But now Minnie is heading home for the holidays with Big Mike in tow.
Big Mike is no delicate violet. He’s quiet and lethal, an ex-Special Forces soldier whose day job involves ‘keeping the Free World safe’. But Big Mike doesn’t want to spoil Minnie’s Christmas and promises not to hurt anyone… His resolve will be tested by Minnie’s father, her psycho brother and three outlaw lieutenants who want his woman.
*This is a 12,000 word story packed with everything needed for a very merry Christmas: love, family, laughter and psychos.


Review:
Minnie’s father is the head of an outlaw motorcycle gang in California. When Minnie was young, her father kept the outlaw ‘lieutenants’ away with strict orders: they could protect her but Not touch her.

Minnie became a super model and moved to New York where she could live her life without her unusual family. Minnie’s brother, Crash, is a bit on the wild side. He knew Mike in the army and introduced Minnie to Mike. She is crazy about the 6’6” hulking, ex-military man who now runs a security business.

Minnie’s father, Snake, unexpectedly invites Big Mike to join them for Christmas. Minnie is fearful that Snake will take Mike into the desert to kill him for being with daddy’s ‘little girl’. Mike is willing to take his chances and promises that he won’t fight anyone. Really – it takes a lot to rile him.

When the pair arrive in California they discover that Snake has also invited three of his lieutenants and removed the earlier restrictions. These circumstances may just lead to situations that rile Big Mike – at least a little.

The entire story is a hoot! The handling of the ‘competition’ by Mike and Minnie is hilarious! The characters are very likeable and the story plot is complete even for a short novella. Maybe it isn’t great literature—but it sure is quick, fun entertainment. This does not need to be limited to Christmas reading although the setting fits the fun. To quote Crash “Best Christmas ever!” I would like to try a longer story by Ms. Kelly. I highly recommended this for readers who want quick laughs and smiles.


I received this ebook through NetGalley. It qualifies for my NetGalley Challenge.
Posted by Martha Eskuchen at 8:56 PM