This is a strong steampunk adventure sharing a tale of patriotism, honor and love.
Toru: Wayfarer Returns
by Stephanie R. Sorensen 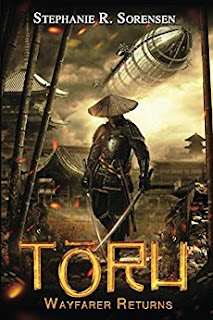 Revolutionary young samurai with dirigibles take on Commodore Perry and his Black Ships in this alternate history steampunk technofantasy set in 1850s samurai-era Japan.
In Japan of 1852, the peace imposed by the Tokugawa Shoguns has lasted 250 years. Peace has turned to stagnation, however, as the commoners grow impoverished and their lords restless. Swords rust. Martial values decay. Foreign barbarians circle the island nation’s closed borders like vultures, growing ever more demanding.
Tōru, a shipwrecked young fisherman rescued by American traders and taken to America, defies the Shogun’s ban on returning to Japan, determined to save his homeland from foreign invasion. Can he rouse his countrymen in time? Or will the cruel Shogun carry out his vow to execute all who set foot in Japan after traveling abroad? Armed only with his will, a few books, dirigible plans and dangerous ideas, Tōru must transform the Emperor’s realm before the Black Ships come.
...
Readers who enjoy steampunk alternate histories more typically set in Victorian England or the American Wild West may enjoy this steampunk story made fresh by the Japanese samurai setting, as well as readers who enjoy historical fiction set in Japan.
(See title link for full description)


Review:
Tōru is a young fisherman from Japan who went was shipwrecked on a fishing trip with his father. Tōru was picked up by Americans and spent two years living with Americans who welcomed him and shared their love of freedom as well as their technology. He returns to Japan in 1852, to a country that forbids the return of anyone who has left the country, even if unwillingly. He hopes to sneak in but is caught and brought to the local Lord. The law says he must be delivered to the Shogun for immediate execution. But the brave, enthusiastic young man tries to convince everyone they must embrace the technology he has brought back so they can prepare to face the enemies that will come – whether British or American. He argues that Japan must prepare itself to prevent being overrun like China was.

The Lord lost his wife at their daughter’s birth and now his lovely young daughter, Masuyo, is an ‘inappropriately’ outspoken, free spirit (doted on by her father). Masuyo finds Tōru’s journal of notes and sketches and is immediately enthralled. She champions Tōru so that her father delays the execution first to allow the young man to return to his home village to see his mother. They proceed to an adjacent Lord’s home and soon the two aristocrats are quietly planning how to enlist others in a rebellion to bring Japan into the steam era.

There are secrets to Tōru’s situation which are a puzzle to everyone, especially Masuyo. He is joined by his childhood friend who is a ‘common’ blacksmith but an uncommon machinist. Soon he is joined by another friend, another Lord’s chief samurai. These friends make an awesome team designing, engineering and building the needed weapons and tools, including railroads and steam dirigibles. The rebellion grows as they find allies in surprising places.

I really enjoyed the intrigue, plot twists, steampunk elements and the political allegory (a country struggling and stagnating under dictated traditions and leaders who lack vision). Ms. Sorenson provides good detail contrasting the living circumstances of the poor, who struggle each day with little hope of ever improving their situation, against the wealthy estates of the Lords and the revered positions of the samurai who have their opportunities as a matter of birthright. Masuyo is a strong, brave and inventive female character who contributes to the visionary team to the point of risking her life and her family. There is tenderness, sorrow, humor, bravery, and danger wrapped up in the story which moves along at a quick pace.

I was reminded a bit of The Last Samurai, probably because I had watched the movie recently. I liked that the author gives a bit of afterword explaining the political atmosphere and history of the setting. The chapter header quotes are apt to the plot as the author creatively delivers this story of patriotism, honor and love. I recommend this to readers who like alternate history and adventure as well as readers who enjoy steampunk and a young romance that seems impossible but finds a way.


I received this book from the publisher through NetGalley. It qualifies for my NetGalley Challenge.
Posted by Martha Eskuchen at 10:08 PM