Audio Book Review: Only Ever You by Rebecca Drake

This is a well written, chilling and emotional suspense!

Only Ever You
Written by: Rebecca Drake
Narrated by: Eva Kaminsky 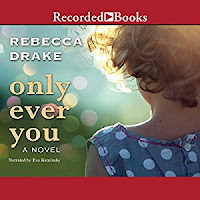 Description
Three-year-old Sophia Lassiter disappears at the playground only to return after 40 frantic minutes-- but her mother Jill's relief is short lived. Jill is convinced the tiny dots on her daughter's arm are puncture marks. When doctors find no trace of drugs in her system, Jill accepts she won't ever know what happened during her daughter's absence and is simply grateful to have her home safely. Except Sophia isn't safe. Three months later, she disappears again. This time from her bed at home, in the night. Working with the police and the community, Jill and her husband David are desperate to bring their little girl home. They remain hopeful---until information turns up suggesting their daughter was murdered, causing the police to turn their suspicions on the parents. Facing ugly family secrets and heart-rending evidence, Jill is still convinced her daughter is alive. But when the dragnet begins to close around them, Jill realizes the worst: if the police believe she has killed her daughter, that means they aren't out there looking for the real perpetrator. They aren't hunting for Sophie or the person who still has her.


Review:
Jill is a photographer used to taking family photos to commemorate occasions. She also gives her time to take photos of grieving parents as she can share their unique pain of loss. Jill’s husband, David, is an up and coming lawyer working to reach partnership in his firm. They adopted Sophia as a newborn and love her as they would a natural child. Sophia goes missing from a public park but is found at the edge of the woods after a frantic 40-minute search. It seems that Sophia may have chased after a dog but Jill is worried about the pin prick on her arm. The doctors find no evidence of foul play and suggest it might be a bug bite.

Jill becomes even more careful watching her child. One morning she awakens to an unusually quite house and soon discovers that Sophia is not in her bedroom or anywhere in the house. The police begin an investigation and the neighborhood turns out to help in the search. When no kidnapping demand is made and evidence is found that suggest murder the police begin to suspect the parents. Innocent statements expressing normal parental frustrations are turned into negative and ominous threats. Then secrets are disclosed that create further suspicion, even between Jill and David. Jill is still focused on finding Sophia but the police are now focusing on her.

As the tension at home builds, the author weaves in scenes showing the actions of the deranged kidnapper. Slowly a connection is revealed that ties in some unexpected players. The mystery suddenly leaps into a suspenseful evasion from police while racing to save Sophia from threats fueled by betrayal and secrets.

I enjoyed the alternating points of view showing Jill’s emotional upheaval and the kidnapper’s unhinged intent. The reaction and responsive behaviors of arrogant colleagues and friends, as well as strangers, is sadly horrifying. Ms. Drake creates real to life characters that the reader/listener can relate to. The pacing was good and the twists kept me glued. Although I suspected an important element early in the story, the author built in red herrings and twists that kept the suspense increasing until the end. I recommend this to readers who enjoy emotional and chilling suspense.

Audio Notes: Eva Kaminsky does a very good job with the narration. I was impressed how she brings the characters alive. The adept voicing and energy fit the suspense of the story. The narration helped make this a gripping experience.

I received this audio book from the publisher through Audiobook Jukebox. It qualifies for my Audio Challenge and O in Alphabet Challenge.
Posted by Martha Eskuchen at 10:54 PM