A Complex of blended races -- a chance for peace or revenge?
Halcyon (The Complex Book 0)
by Demelza Carlton 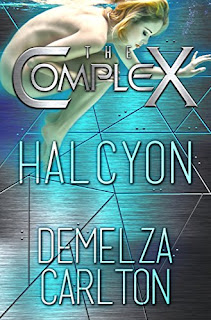 Catch a siren. Stop the storm. Whatever the cost.
Allie, sick of war and grief, signed up as a lowly maintenance worker for the Complex in the hope of securing a lasting peace between the Metas and Humans. However, the girl has her own secrets, not least of which is her assignment from the Lorn government to monitor the Complex for signs of a suspected saboteur.
Galen, the only survivor of the Poseidon shipwreck, didn't join the Complex for peace. He wants vengeance on the siren Halcyon, the mysterious Mer whose terrorist tactics single-handedly killed more humans than any other Meta. His sources say that Halcyon is on Lorn, and he'll happily kill every Mer in the Complex until his parents' murderer is dead.
Can they catch the terrorist before the Complex is destroyed?


Review:
Allie has chosen to become a maintenance worker in the Complex for personal reasons as well as political ones. She is tired of the war and the loses. The community project at the Complex is designed to put humans and Meta (other beings) living together so they can find a way to peace.

Galen was only a teen when he became the sole survivor of an attack by the Mer siren, Halcyon. That devastating attack started the Meta war. Now he is the chief engineer for the Complex. Although the Complex has been developed to promote peace, Galen isn’t done with the war yet. He has heard that Halcyon is at the Complex and he intends to revenge the death of his parents, as he has planned for years.

Galen is immediately drawn to Allie, even as he tries to keep his focus on his primary goal. Meanwhile, Allie is secretly hunting for the terrorist threat without realizing where that search will end.

The story was engaging, with a bit of a twist. I enjoyed the intelligent characters, particularly Allie. I enjoyed following her quirks. This is a novella but it is a full story with an engaging plot. There was suspense and budding romance. The dialogue was natural, the writing flowed well and the story read quickly with good pacing. I would be willing to read more by Ms. Carlton.


I was given a free copy of this title from the author with no obligation to review.
Posted by Martha Eskuchen at 2:49 PM