This has lots of high tech, action and some interesting characters, but I found the plot a bit confusing. 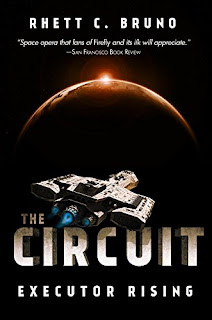 "A hard-charging opener to a promising, if bloody, space-opera series." —KIRKUS
Centuries after Earth was rendered an uninhabitable wasteland, humanity was forced from its homeworld and founded the Kepler Circuit, a string of colonies throughout the solar system. These settlements provide resources to the remnants of humankind, the most important resource being the newly discovered element—Gravitum—found only in the Earth’s unstable mantle.
But a powerful religious faction known as the New Earth Tribunal has risen to preside over most of the Circuit. Though there is barely a faction left to challenge them, a string of attacks on the Tribunal’s freighters causes them to suspect their mortal enemies, the Ceresians, of foul play.
Tasked with solving the problem is Sage Volus: Tribunal Executor. Spy.
Sage quickly infiltrates the ranks of a roguish, Ceresian mercenary named Talon Rayne, seeking to discover the truth behind the attacks, but the longer she works amidst Talon and his squad, the more she finds her faith in the Tribunal tested.
While her quest for answers only unearths more questions, a new threat is on the rise, and it plans to bring down the Tribune once and for all.


Review:
Sage Volus is a Tribunal Executor who handles the necessary enforcement against those who violate the rules of the cult-like Circuit Tribunal. She also serves as a spy when so instructed. It is a rough job but she dedicated herself at a time when she had nothing else to live for.

Cassius Vale is a rare commodity. He is an Ex-Tribune and there are those who would prefer to see him dead. Cassius son, Caleb, was married to Sage. Seven years ago, Caleb died while exploring new growth on the husk of old earth. Sage was injured in the explosion too, but Cassius made sure she survived.

Cassius has broken faith with the Tribunal whom he blames for his son’s death. He has put into place a plan to circumvent the control of the Circuit, or at least to create chaos. After all, he is known as ‘creator’ to his Automated Dynamic Intelligence Mech (ADIM).

Sage is directed by the Tribune to investigate the attacks on the Circuit freighters. Some suspect their mortal enemies, the Ceresians, but one or two of the Tribune suspect Cassius. Sage manages to infiltrate the team of a Ceresian mercenary named Talon Rayne. The things Sage discovers begin to test her previously unquestioned devotion to the Tribunal. And facts have only begun to surface.

I really liked ADIM as an AI character, although he is a bit brutal in his approach to his tasks. Sage is a Kick-butt character and I liked that she has feelings even after years of trying to numb her heart. I liked Cassius but honestly, I am not sure if he is good, bad or simply mad.

The story moves at a good pace with lots of action and high tech. It is not one that can be read lightly as it takes concentration to follow what is happening. It didn’t seem totally clear what had happened to destroy earth and why the Circuit had to rely on the Gravitum from earth. Even when finished I felt confused as this seemed like the second book in a series that didn’t pull in all the backstory. There were numerous grammar errors plus the story ends without wrapping up either line of action, for Sage or Cassius. So – I liked the basics but it has some drawbacks. I noted that the reviews on book two are favorable so that is a good sign.


I received this from the publisher through NetGalley. It qualifies for my NetGalley Challenge.
Posted by Martha Eskuchen at 9:24 PM