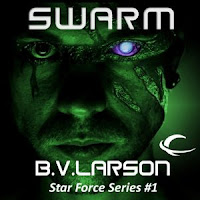 Publisher's Summary
Earth arms marines with alien technology and builds its first battle fleet! Kyle Riggs is snatched by an alien spacecraft sometime after midnight. The ship is testing everyone it catches and murdering the weak. The good news is that Kyle keeps passing tests and staying alive. The bad news is the aliens who sent this ship are the nicest ones out there.
A novel of military science fiction by best-selling author B. V. Larson, Swarm is the story of Earth's annexation by an alien empire. Long considered a primitive people on a backwater planet, humanity finds itself in the middle of a war - and faced with extinction.
Battle stations! Listen to another Star Force novel.
©2010 B.V. Larson (P)2011 Audible, Inc.


Review:
Kyle Riggs is a college professor and farmer – until aliens reach into his yard and capture his son. As Kyle scrambles to grab a shotgun and get his daughter into the car for safety, his son’s body is dropped from the sky. Then the alien snake-like arm breaks through the car window to snatch his daughter. A few minutes later his daughter is dropped on his roof. Then they grab him, and Kyle is more than happy to be dragged to the ship so he can shoot the enemy who took his children. Soon Kyle is facing obstacles and passing levels before he realizes he is being tested. Before his anger subsides, and he gets to cope with his grief and guilt, Kyle is caught up in a battle for his life… then a war for his planet. Kyle and other successful fighter/survivors have been recruited by smaller alien ships to be commanders and to help fight against larger ships who plan to strip resources from earth.

Kyle manages to rescue one of the other capture ‘candidates’ so he ends up with a young, curvaceous sidekick which is different than most of the other ships. He hesitates to join the ‘team’ of fighters which makes him one of the rogues. Kyle’s computer science background helps him come up with solutions and tactics which make it clear the other ships need his help as much as he needs them. The Star Force, and especially Kyle and his ship, end up teaming with special earth forces to face the enemy.

Kyle’s character is a little awkward as he goes from a rather normal professor/farmer to a fighter, a strategist and finally a super warrior. He continues being a rogue as he leads by his own initiative despite orders. I liked that he uses his computer thought processes to relate to the ship but his taking over leadership of military forces is a stretch. The female character is a feisty, buxom caricature and it was sort of icky (awkward again) that Kyle was lusting after her shortly after losing his kids. Still, this wasn’t a huge issue and I didn’t let it bother me. The story is fun listening with lots of action. It moves quickly and made me think of a comic super hero scenario (perhaps like Iron Man). I’d be willing to listen to more in the series when I want a fast, fun, military sci fi fix. I recommend this to listeners/readers who are okay with fast-paced, easy action entertainment and are not looking for serious military politics.

Audio Notes: Mark Boyett does a nice job with the voices and energy in the presentation. The story is primary told in first person by Kyle but there are other characters with accents that are done well by Boyett. The narration added to my enjoyment of the story.


This has been on my Audible shelf since May 2015. It qualifies for Audio Challenge and TBR Challenge.

Posted by Martha Eskuchen at 10:54 PM