I enjoyed this paranormal suspense.
The Reader
by MK Harkins 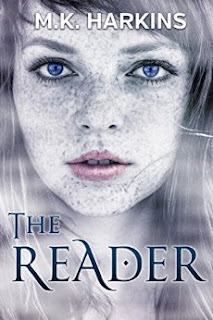 Hunted, shot, and without her memory, eighteen-year-old Ann Baker wakes in shallow water on a deserted Pacific Northwest island. She is soon approached by two young men claiming to be her friends. Something isn’t right, but when gunshots sound, Ann is left with little choice but to allow Devon and Archer to help her escape. Soon she finds herself in their North Bend mountain compound, where the higher evolved humans claim to be mind-readers. While Ann heals, she realizes they believe her to be one of the last and most powerful of all – The Lost One.
She’s welcomed by most with opened arms, but not everyone is happy about her arrival. A jealous adversary has plans for Ann, which spirals the entire Reader community into chaos.
As lies, murder, and betrayal threaten to rip apart the once harmonious mountain dwellers, Ann is thrust into making a decision that could save or devastate not only The Readers, but all of mankind. But there’s just one glitch: by doing so it may require her to make the ultimate sacrifice.


Review:
Ann wakes up on a beach in pain and under gunfire. Two gorgeous men sweep in to hustle her to safety. She has no memory of events or even her name but going with them seems better than being shot… again.

Devon and Archer are “Readers” who believe that Ann is ‘the Lost One’ who can save their race of Readers according to an old prophesy. They are saving her from the ‘enemy’ clan of Hijackers or “Jacks” who are also seeking her as the key element to power under the prophesy. Devon and Archer bring Ann to the Readers’ secret compound where she is helped by a kind doctor and welcomed by almost everyone. It soon is clear that Devon and Archer are attracted to Ann even as she is conflicted by her feelings.

Ann finds peace in the Reader community but also feels she must escape to discover who she really is and what happened to her parents. Her attempted escape has consequences that lead to the beginning of the war between the Readers and the Jacks. Ann discovers her parents are being held captive and she is betrayed by someone she trusted.

The story is told by Ann in first person and got my attention from the very beginning. I enjoyed the conflict of Ann’s emotions and feelings. I especially liked the twists that kept the danger and excitement moving until the end. Although this story has YA elements it has more plot and intrigue than YA angst – which I think is a good thing. The settings and emotions are portrayed with good realism and blend well with the paranormal element. I appreciated that the story was “clean” with no foul language or sexual descriptions beyond kissing. I found the story engaging and would look for more by this author.


I received this from the publisher through NetGalley. It qualifies for my NetGalley Challenge and was part of my November Sci Fi reading.
Posted by Martha Eskuchen at 10:12 PM