Book Review: A Most Devilish Rogue by Ashlyn Macnamara

This is a warm story, rich in romance.
A Most Devilish Rogue
by Ashlyn Macnamara 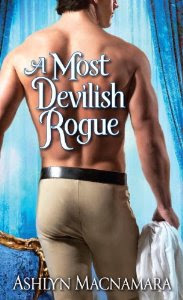 Book Description
Publication Date: August 27, 2013
Fans who adore Julia Quinn, Eloisa James, and Sabrina Jeffries will savor Ashlyn Macnamara’s sensual new novel, which proves that two hearts are better than one.
Years ago, when Isabelle Mears was still a young miss too infatuated to know better, she surrendered her innocence to a dishonorable man. Though ruined and cast out from society, she has worked hard to shelter her illegitimate son, Jack. Having sworn off men in her quiet but dignified life, Isabelle is unprepared for the deep longing that rips through her when a handsome stranger rescues her rambunctious six-year-old from the pounding ocean surf.
George Upperton is a man in trouble with debts, women, and a meddling family. He is, by all accounts, the last gentleman on earth Isabelle should be drawn to. But loneliness is a hard mistress, and caution gives way to desire . . . even though Isabelle is convinced that happiness can’t be found in the arms of such a devilish rogue. Only when Jack is kidnapped does Isabelle discover the true depth of George’s devotion—and how far a good man will go to fight for the woman whose love is all that matters.


Review:
George Upperton appears at first to be a rather offensive aristocratic man who has built up debt through gambling and supporting a mistress with costly tastes. When his mistress announces bad news – she is pregnant – George escapes town to join his family at a country party of a good friend.  He hopes to find some friendly card games where he can win enough to bring his debts current, complete plans for a revenge he is seeking for a friend and make provisions for his ladybird. Meanwhile he has to dodge his mother who is pushing him towards a suitable marriage.

George strolls down to the beach just in time to rescue a young boy. Jack, a precocious lad of six, clings to George and decides that the waves and George are fun. Jack’s mother, Isabelle, is understandably distressed. She is grateful but wary considering her past experience with a man of ton who took advantage of her innocence leaving her pregnant, ruined and outcast by her family.

George and Isabelle are drawn to each other even though he doesn’t need complications in his life and she doesn’t need to be used or scorned by anyone new. She gets enough disdain even from the locals who look down their noses because of her circumstances.

When Isabelle gets a threatening note about Jack she ends up seeking George’s help to find the boy. Then Isabelle’s house servant/companion, Biggles, disappears the next day. George enlists the help of his male friends to try to find her son. At first Isabelle is welcomed into the manor house until her own haughty cousin steps in the room and proclaims her shame.

Most of the town see George as he describes himself: “A simple man who plays too deep, drinks too much, and enjoys too many ladies outside the bonds of marriage.” (Location 3299.)  But Isabelle sees beyond the shallow facade to the man of sensitivity, gentleness and kindness.

I didn’t like George at first but as his sensitive nature was revealed he became much more likeable. I did like Isabelle, especially for her strength in the face of being outcast to raise her son with little help. I liked the rich warmth of the story and the kidnapping plot. However I was a little disappointed that the kidnapping occurs and then the majority of the book proceeds to share the developing romance and passion between George and Isabelle. It seemed quite a long time before the hunt for Jack and Biggles led anywhere.

I had issues with playing the piano at midnight and not disturbing anyone in the manor. Also I felt like there were unanswered questions with Isabelle’s relationship with her father. Even with these issues I did enjoy the book. I would only wish for less focus on the sensual romance and more on the substantive plot. But for readers who love a sensual romance - this should fill that craving very nicely.


I received this for an honest review for Random House and the author as part of a Blog Tour. Please see Author Guest Post and Giveaway for more about the book and a chance to win.
Posted by Martha Eskuchen at 6:21 PM