This is a fun, flirty read. 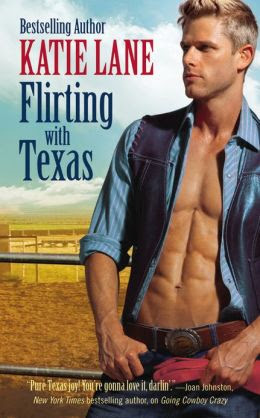 
Book Description
Release date: July 30, 2013 | Series: Deep in the Heart of Texas (Book 5)
YOU'RE A LONG WAY FROM HOME, COWGIRL
On her own in the Big Apple, Jenna Jay Scroggs can handle herself when trouble arises. But when she tries to rescue a horse, the passionate do-gooder ends up on a runaway Central Park carriage ride with a hunky stranger. With his sexy drawl and well-worn Levis, Beauregard Cates is doing his darnedest to make Jenna homesick for the small western town she's spent years trying to forget. And it's working: She's dangerously close to falling head over boot heels for the rugged rodeo star with hair the color of moonshine.

Beau came to the big city to escape his past and live life to the fullest. Yet the leggy blonde with eyes as blue as a western sky causes a real hitch in his giddy-up. So when the well-meaning folks of Bramble plot to bring Jenna home, Beau will need to convince her that she won't ever get Texas out of her blood - or one good-time, ever-lovin' cowboy out of her heart.


Review:
Jenna is a passionate activist fighting evil in New York as she seeks to help the underdogs of the world. Although she was raised in a small Texas town in a lively family with “country”-type parents, Jenna felt like she never quite fit in with her taller dark-haired siblings. When her parents wouldn’t accept her college boyfriend, Davy, a long-haired ‘artist’, Jenna moved to New York in her own little rebellion and has refused to speak to her family.

Beau is a handsome cowboy competing in rodeo bull riding around the country. He owns Miss Hattie's Hen House, a former brothal, now a Bed & Breakfast, in Bramble, Texas that is managed by the former Madam, Minnie. Minnie has an agenda and she asks Beau to track down Jenna in New York.
No sooner does Beau locate Jenna then he gets caught up in her escapades. He has to rescue her after she takes off with a horse and carriage because she wants to save the horse from the cruel master. Beau shows up at Jenna’s apartment and isn’t impressed by her girly looking, wimpy boyfriend. Beau didn’t intend to get entangled with Jenna but then they get shanghaied and transported together from NY to Texas in a small travel trailer!

Once Jenna simmers down she realizes she is attracted to the rugged cowboy but he has made it clear that he is out for fun and no commitment. Beau is surprised by his attraction to Jenna too, especially since he has had some trouble of late responding to his usual rodeo groupie one night stands. Just as they decide to explore their attraction they are totally surprised to have the trailer door opened to the cheers of the home town folks! It seems the town had decided it was high time that Jenna made up with her folks. If the adventure brought Beau in from a two year absence too, all the better.

Beau has avoided his family as he copes with recovering from cancer and treatment at a young age with no promises that it won’t come back. As Beau continues to struggle with his own demons, Jenna plans to make an escape back to NY and Davy.

Both characters have an awakening as a misunderstanding has Jenna panicking about her family history and a medical emergency for Minnie has Beau seeing his illness and absence in a whole new light. While they are navigating their emotions another character, Marcy, who has a high school reputation as a slut, is suddenly spending time with the bachelor pastor. Will these couples be able to face their fears, move beyond their pasts and maybe find a future together?

This story turned out a lot better than it started for me. I wasn’t crazy about the playboy character of Beau and even Jenna was a bit extreme. But they both grew on me until I was cheering for them by the end. I really liked the insights that Ms. Lane shared on the cancer and self-esteem issues. Minnie, even from her wheelchair, shares a great positive attitude. Instead of accepting the old adage “Life is hell, and then you die” Minnie proclaims “Life isn’t hell; it’s a journey. A wonderful, breathtaking journey.” (Page 256.)

The romance with the two couples was on the steaming side for Jenna and Beau while more sweet and struggling for Marcy and Sean. There was some mobster involvement that added a little extra fun and excitement. I recommend this story as a fun read especially for romance readers who enjoy their characters a bit wacky with plenty of escapades to share.


I received this ARC from Hachette/Forever to provide an honest review.
ENTER THIS GIVEAWAY for the ARC Copy:

* This contest is open to those with US or Canadian address.
* This contest will close 10 PM (Central) on August 16, 2013.
The winner will be randomly selected from all entries.
WINNER WILL BE ANNOUNCED on August 17, 2013.
Winners will have 72 hours to respond by email or the winners form linked in the announcement.
Posted by Martha Eskuchen at 4:38 PM