I found this to be a great, thrilling listen.
The Overton Window
by Glenn Beck
Narrated by James Daniels 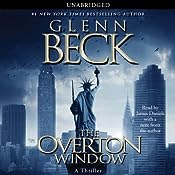 Publisher's Summary
A plan to destroy America, a hundred years in the making, is about to be unleashed...can it be stopped?

For Noah Gardner, a 20-something public relations executive, it's safe to say that political theory is the furthest thing from his mind. Smart, single, handsome, and insulated from the world's problems by the wealth and power of his father, Noah is far more concerned about the future of his social life than the future of his country.

But all of that changes when Noah meets Molly Ross, a woman who is consumed by the knowledge that the America we know is about to be lost forever. She and her group of patriots have vowed to remember the past and fight for the future - but Noah, convinced they're just misguided conspiracy-theorists, isn't interested in lending his considerable skills to their cause.

And then the world changes.

An unprecedented attack on U.S. soil shakes the country to the core and puts into motion a frightening plan, decades in the making, to transform America and demonize all those who stand in the way. Amidst the chaos, many don't know the difference between conspiracy theory and conspiracy fact - or, more important, which side to fight for.

But for Noah, the choice is clear: Exposing the plan, and revealing the conspirators behind it, is the only way to save both the woman he loves and the individual freedoms he once took for granted.

After five back-to-back number-one New York Times best sellers, national radio and Fox News television host Glenn Beck has delivered a ripped-from-the-headlines thriller that seamlessly weaves together American history, frightening facts about our present condition, and a heart-stopping plot. The Overton Window will educate, enlighten, and, most important, entertain - with twists and revelations no one will see coming.


Review:
Noah Gardner is a lackluster son of a highly powerful, political puppet master, Arthur Gardner. Noah doesn’t invest emotionally in any of the ambitious projects or politics of his daily work at the prestigious public relations firm, Doyle and Merchant. He does enjoy the playboy lifestyle afforded by his father’s position and money. One afternoon his attention is captured by an alluring young woman in the office even though she rebuffs him with disinterest.

Noah pursues her by following her to a rally supporting the American Constitution. Molly Ross continues to intrigue him with her disdain as well as her passion for the cause of American freedom. She is part of a group, similar to a Tea Party, known as the Founder’s Keepers, who profess to seek peaceable change. When the rally turns violent many of the attendees are taken to jail. Noah insists that there was a plant who instigated the violence and when that truth appears to be close to being revealed to the public most of the rally attendees are released with a little help from Noah’s father and attorney.

Noah is further embroiled in Molly’s schemes to gain access and information from his father’s computers. They learn that Arthur Gardner and his firm are part of a group of elite power brokers who are seeking to bring about a one world government. They will use money, power, manipulation, bribery, coercion, and whatever other means necessary to achieve their goal. Molly (and the reader) learn of a tool known as “the Overton Window” which measures public opinion. This tool allows the monied powers to manipulate public opinion by setting up events that slowly push the boundaries of public acceptance closer and closer to the desired controls sought by the puppet masters.

Noah is kidnapped and it becomes clear that Molly used him from the outset. Yet he thinks there was more between them than the obvious lies. Noah again seeks to help Molly as a nefarious terrorist plot slowly unfolds. A horrible act of violence that is being arranged by the puppet masters but will be blamed on Molly’s group.

The beginning was a bit slow as I wondered at the detailed descriptions of Noah’s obsessive interest in Molly. However that is understandable as the plot progresses. After an hour or two in I was glued to listening to this story until it finished. I was impressed with the writing skills as well as the characterization and plot. All of the elements reveal the extreme intelligence of the author – regardless of what one might think of his political and religious views. Does it contain a message on politics and religion? Yes - clearly on politics and subtly on religion. Is it a good thriller? Absolutely.

Beck starts the book with a preface that declares the work to be in the nature of “faction” – a fictional story woven around facts. The story presents a present day situation that should open eyes and make each of us look at the circumstances around us to see if we can really discern truth from intentionally manipulated PR. I loved the story and am anxious to begin the next book, The Eye of Molech, which I am reviewing for Simon and Schuster through Audiobook Jukebox.

Audio Notes: This story was good on its own but the narration enhanced my enjoyment and made it move much more quickly than if I had read a print or ebook version. James Daniels does a really good job keying into the character personalities. I will look for other works narrated by Mr. Daniels.

Mr. Beck quotes several treatices on freedom and government in the story. One that I think is particularly appropriate is:


The most basic question is not what is best, but who shall decide what is best.
Thomas Sowell

This audio was from my Audible library.
Posted by Martha Eskuchen at 5:15 PM