This is fast paced, solid suspense with the romance as an ongoing, developing element.
Revenge: The Faces of Evil Series: Book 5
by Debra Webb 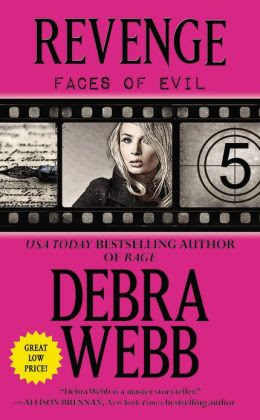 Book Description
Publication Date: July 30, 2013
The Faces of Evil Series: Book 5
The desire for revenge can never be sated . . .

When her beloved high school teacher appears on her doorstep, Deputy Chief Jess Harris is flooded with fond memories-until the woman says she's about to be charged with murder. Called to the scene of the crime, Jess learns the victim of the bizarre and brutal slaying was a member of Birmingham's famed "Five."

Twelve years ago, the Five were rich, popular high school seniors who threw one wild last party. Two social outcasts were invited to play in the "loser games." The next morning, one player killed himself. Now Jess fears that an invitation to an upcoming class reunion may have forced the Five to play a new deadly game. As Jess fights to keep her former teacher from suspicion-and her relationship with Chief Dan Burnett separate from her work life-she knows she is caught in a vicious cycle of vengeance. And the killer is far from finished . . .


Review:
This is book five of a continuing series that follows tough cop Jess Harris, Deputy Chief of Birmingham, Alabama, and her boss, Dan Burnett. Dan was Jess’ high school sweet heart and the pull and passion is still strong between them. But Jess has spent 20 years caring for herself and she is insistent that she be treated equally as the other Deputy Chiefs. Making love with the Chief and having him hover around trying to protect her doesn’t help her independent stand.  Jess and Dan walk a fine line trying to figure out how they can balance their professional lives with their personal desires.

As Jess and Dan dance around their issues murders pull them into work mode. One of Jess’ former teacher, Frances, is a prime suspect for the murder of Scott Baker, her retirement home manager. The widows group has been battling management as the developer prepares to build a new high rise that will completely block the view of the existing residents. It’s Jess’ job to find the real killer but she has a personal interest in protecting her beloved friend.

Jess gets some information from another old class mate, Buddy Corlew, who is a private investigator hired by Frances to dig up dirt on the deceased.  Buddy and Dan have been at odds since high school when Buddy made a pass for Jess because he was jealous of Dan always besting him. Buddy reminds Jess that twelve years ago Scott was one of five hot shot high school bullies who had been suspected in the death of another student, Lenny. Dan had been the head of the investigation that got closed for lack of evidence and pressure from the mayor’s office.

Now it seems that Lenny’s best friend is back in town and the surviving four, three men and a woman, are holding tight to their secrets. Then another of the five dies and the three survivors begin to panic. Jess is busy trying to locate the new suspect and get the truth from the other three but she has distractions. Her new apartment has been broken into and there is an unresolved issue with another police deputy who has disappeared.  Beyond all of this activity Jess is getting taunting emails and phone messages from a past monster. Spears is a serial killer who kidnapped and tortured Jess. He was caught and imprisoned and believed to have left the country but now they have discovered that he may have doubled back. Jess is baiting him but is she ready for the show down? I’ll have to get to the next book to find out!

The mystery of the “five” plays out well with some good twists. I enjoyed the investigative process as well as the emotional struggles that Jess and Dan are juggling in their romance. Jess is going to have to deal with her independence issues at some point. There are some other unresolved items, like the secretive landlord and the missing officer, that will carry the suspense into the next book. The reading is quick with the fast paced action. There was no noticeable offensive language which pleased me. This is fine entertainment and I look forward to the next book in the series.


I received this ARC from Forever/Hachette for an honest review.
ENTER THIS GIVEAWAY for the ARC Copy:


ENTRY FORM HERE
Don't forget to fill in the form for entry!
I have noticed a few commenters who forgot to enter through the Form.

* This contest is open to those with US or Canadian address.
* This contest will close 10 PM (Central) on August 23, 2013.
The winner will be randomly selected from all entries.
WINNER WILL BE ANNOUNCED on August 24, 2013.
Winners will have 72 hours to respond by email or the winners form linked in the announcement.
Posted by Martha Eskuchen at 2:00 PM