This is a really fun listen! If you have this one in your TBR pile I recommend you get to reading, or listening to, it -- then enjoy!

Ready Player One
by Ernest Cline
Narrated by Wil Wheaton 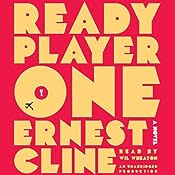 
Publisher's Summary
At once wildly original and stuffed with irresistible nostalgia, Ready Player One is a spectacularly genre-busting, ambitious, and charming debut—part quest novel, part love story, and part virtual space opera set in a universe where spell-slinging mages battle giant Japanese robots, entire planets are inspired by Blade Runner, and flying DeLoreans achieve light speed.
It’s the year 2044, and the real world is an ugly place.
Like most of humanity, Wade Watts escapes his grim surroundings by spending his waking hours jacked into the OASIS, a sprawling virtual utopia that lets you be anything you want to be, a place where you can live and play and fall in love on any of 10,000 planets.
And like most of humanity, Wade dreams of being the one to discover the ultimate lottery ticket that lies concealed within this virtual world. For somewhere inside this giant networked playground, OASIS creator James Halliday has hidden a series of fiendish puzzles that will yield massive fortune—and remarkable power—to whoever can unlock them.
For years, millions have struggled fruitlessly to attain this prize, knowing only that Halliday’s riddles are based in the pop culture he loved—that of the late 20th century. And for years, millions have found in this quest another means of escape, retreating into happy, obsessive study of Halliday’s icons. Like many of his contemporaries, Wade is as comfortable debating the finer points of John Hughes’s oeuvre, playing Pac-Man, or reciting Devo lyrics as he is scrounging power to run his OASIS rig.
And then Wade stumbles upon the first puzzle.
Suddenly the whole world is watching, and thousands of competitors join the hunt—among them certain powerful players who are willing to commit very real murder to beat Wade to this prize. Now the only way for Wade to survive and preserve everything he knows is to win. But to do so, he may have to leave behind his oh-so-perfect virtual existence and face up to life—and love—in the real world he’s always been so desperate to escape.
A world at stake.
A quest for the ultimate prize.
Are you ready?


Review:
Wade is a teenager in 2044 where lives are lived primarily in a free virtual computer world known as The OASIS. Wade actually resides in the crowded ‘real’ world – on and off – with his Aunt and her boyfriend in a mobile home in the stacks, where mobile home units have been staked twenty-two high in a precarious community. But Wade actually spends more time in his personal hideout in an abandoned van. Since schools became too crowded, students even attend through the virtual world, being given the minimal gear and choice of an avatar for their id in the OASIS. Friends are made in the virtual world without ever knowing the real person behind the avatar.

Wade explains how James Halliday, the creator of the OASIS, set up a game in the system as a means to distribute his vast billions on his death.  The first player to collect the three keys, play through three gates and find the hidden Easter egg will inherit the entire fortune. Initially there is a system wide frenzy as the treasure game hunters, called Gunters, study Halliday’s favorite games and past-times trying to find the solution. Some people have formed ‘clans’ and there is a massive, villainous corporation, IOI, whose players are called the Sixers, who want to win and control the system. It is feared if IOI gets possession that they will charge everyone for use of the OASIS and change the world situation for the worse. Wade and his best friend, Aech, agree that they are independent players even though Wade struggles with minimal assets and experience.

It has been five years since Halliday died and the scoreboard has shown no progress. Then one day Wade, or his avatar, Parzival, stumbles upon the path to the first key! A new fervor ensues and others quickly begin to show up on the board. Second is a slick female character, Art3mis, on whom Wade has a crush, then Aech, then two Japanese who are believed to be brothers.  After them come the institutional IOI Sixers who basically block anyone behind them.

Now the race is on and the leaders of IOI are not beyond bribery or even murder to get the secrets and prevail in the hunt. As Wade/Parzival plays and searches he shares memories of the early games like D&D, PACman, and early game systems like Atari. The serious players also have to know classic movies that were Halliday’s favorites including Ferris Bueller’s Day Off, War Games, Monty Python’s Holy Grail and more. There is a huge battle to the end between the mega corporation and the young players who finally team together and get a little help just to hide and survive.

This was wonderful fun to listen to, recognizing that the players are computer geeks and this is the only life and hope they have. There are clues and puzzles that Wade must solve and I enjoyed the trip down memory lane hearing about computers, games and movies from the 1980s. I liked the positive messages that were shared with the good v evil set up and with the characters becoming friends through their personalities without meeting. I recommend this book for entertainment and special fun for those who lived through the ‘80s.

Audio Notes:  Wil Wheaton does a wonderful job portraying Wade, his pals and even the evil CEO. I got caught up in the story but it was certainly enhanced by the excellent narration.


I'm really glad I selected this was from my own Audible Library. I picked it for my July "Just For Fun" read.
Posted by Martha Eskuchen at 9:19 PM