Audio Book Review: The Eye of Moloch by Glenn Beck

This is another good political thriller - a picture of forces at work in our current world.
The Eye of Moloch
by Glenn Beck
Narrated by Jeremy Lowell 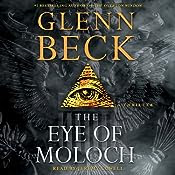 Publisher's Summary
The last battle for freedom is underway....

By the end of Glenn Beck’s number-one best-selling political thriller The Overton Window, a young rebel named Molly Ross had torn aside the curtain to reveal a shadow war being waged for the future of America. In the six months since then, her fight for freedom hasn’t gone well. Marked as traitors and hunted by ruthless government-sanctioned mercenaries using the most advanced surveillance technologies ever created, Ross and her "Founders' Keepers" find themselves cornered and standing alone. but the fight is far from over.

The battle lines in this bitter rivalry are as old as civilization itself: On one side, an unlikely band of ordinary Americans, ready to make their last stand in defense of self-rule, freedom, and liberty - and on the other, an elite cabal of self-styled tyrants who believe that unlimited power should be wielded only by the chosen few. That group, led by an aging, trillionaire puppet-master named Aaron Doyle, will stop at nothing to destroy the myth that man is capable of ruling himself.

As Doyle prepares to make his final move toward a dark, global vision for humanity's future, new allies join the fight and old enemies change sides. In the midst of it all, Molly draws together a small but devoted group willing to risk their lives to infiltrate one of the most secure locations on earth - a place holding long-standing secrets that, if revealed, would forever change the way Americans view their rare, extraordinary place in history. Exposing these truths, and the real-life game of chess being played for mankind’s freedom, is their last chance to save the country they love.


Review:
This story picks up a few months after The Overton Window closes. Noah has had his life turned upside down by the truths that Molly Ross and her band of Founder’s Keepers are trying to bring to the attention of the public. Noah was tortured by his father to the point where he had to  make a choice to follow in his father’s powerful, manipulative footsteps or die. Or he could pretend to meekly regain his position within his father's regime while playing the inside man to help Molly.

This story focuses on the struggles that Molly, her main protector, Thom Hollis, and the other resistance members face as they continue to try to expose the truth while being maligned.  The power brokers are using terrorism to push citizens to give up their rights and they are blaming the acts on Molly’s group, particularly Hollis. The small resistance team is now on the run, surviving on the road and in the woods, as they try to find a save refuge.

Meanwhile Noah awakes back in the facility his father left him in recovering from an injury after being sent out as part of a militia group to gun down the Founder’s Keepers. He meets three unlikely allies. Virginia Ward is a former CIA assassin who is a self appointed investigator of the truth. Although it is not clear why, she has gotten a request from Noah’s father to interview Noah and investigate the allegations regarding Molly Ross.  Ira is a ‘put-out-to-pasture’ news journalist who is being used to write copy and press releases that are acceptable to the powers that be. Ira’s unhappy companion is Lana, a sullen, angry young girl who is a computer wizard and hacker.

Noah tells Virginia that it is like a game of Chess– Noah and Virginia (and others) are being manipulated and the opposition is already planning three moves ahead. This book also gives a more personal view of Doyle, the head puppeteer, who even controls Noah’s father.

This is a story of truth, love and virtue standing up to the powers of evil, control, corruption and  revenge. The scary thing is it looks like a true picture of happenings in America today - it should serve as a wake up call to those who cherish freedom. Noah is a reluctant hero and leader but, as several of the other characters note, he appears to have been called to step up and lead. There is a little bit more faith based exposure in this book – which is fine by me. The situation with Noah reminded me of the story of Esther who was placed in her position for ‘such a time as this’!

Audio Notes: I was a little disappointed that this was a different narrator than the reader of The Overton Window, which I had just recently listened to. However Mr. Lowell does a good job too of portraying the different character traits through their voices and expressions. Listening moved this book along quickly and enhanced the read for me.

I received the Audio CDs from Simon and Schuster, through Audiobook Jukebox, for an honest review.
Posted by Martha Eskuchen at 11:13 PM