This is an intense, engaging thriller!
Anonymous Sources
By Mary Louise Kelly 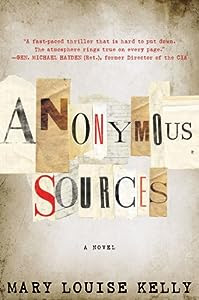 Book Description
Release date: June 18, 2013
An intriguing thriller from a former NPR correspondent about a young reporter who must match wits with spies, assassins and a terrorist sleeper cell targeting the very heart of American power.
“If, on an early summer’s night, you wanted to kill a man, how would you do it? Would you lay a trap, sharpen a dagger, uncork a poison?
Personally, I’ve always leaned toward the dramatic.
But looking back, I wonder now if the events of last summer didn’t begin with a quieter sort of murder.”

So ponders Alexandra James, a beautiful, driven, yet troubled New England Chronicle reporter. She is assigned to cover the death of Thom Carlyle, son of one of the most powerful men in Washington. Just back from a year abroad, Thom falls from the top of a Harvard bell tower on a warm summer night. Did he jump, or was he pushed? For Alex James, who can get in anywhere, sleep with anyone, out-drink and out-shop her demons, it is the story of a lifetime. As she chases leads from Harvard Yard to the courtyards of Cambridge, England, to a clandestine rendezvous in London, to the inside of a nuclear terrorist network...the intrigue seems to suit her.

But nothing is what it seems. When she arrives back in Washington, DC, for a key interview that promises to tie together the leads she has puzzled out, Alex the hunter becomes Alex the hunted. An assassin is dispatched...Her laptop disappears...Her phone is tapped...And she begins to grasp that Thom Carlyle may have been killed to hide a terrifying conspiracy within the White House itself. Former NPR Intelligence correspondent Mary Louise Kelly has turned her own real-life reporting adventures into fiction with this stylish spy thriller.


Review:
Alexandra James is a passionate journalist with a high energy personality. She has some control and neurotic issues left over from a traumatic loss but she keeps the demons at bay – mostly– by obsessive work. Her ‘news beat’ is higher education, a prestigious spot she earned by persistently following the crumbs to uncover a deeper story.  Her demanding boss knows he can rely on her to get the details and often scoop the competition.

Alex begins to investigate the death of a graduate student, Thom Carlyle, who ‘fell’ from Harvard Bell Tower. Thom is the son of the President’s legal counsel. There are rumors of suicide but Alex learns that there were no fingerprints at the crime scene and that raises a red flag. Now she is like a bull tracking down every clue she can find.

Her search leads her to England to interview the ex-girlfriend who is already playing footsie with a handsome, devilishly charming rogue. Alex diligently follows the leads pulling together seemingly unrelated clues because she is convinced the pieces will fall into place. She must be stirring trouble as she gets a warning from a strange Embassy official and she suspects that she has uncovered a terrorist plot. Her editor isn’t buying into her conspiracy theory until the young girl seated next to her on the return flight, who happened to look a lot like Alex, turns up dead before the plane lands.

Now Alex is on the run seeking safety and trying to figure out which officials she can trust. When she is attacked again she learns that their is a traitor high in the government ranks. She has to get to the right people and convince them to track a bomb and figure out the target before it is too late..

I really enjoyed the intense suspense in this thriller. Alex is a flawed character with some psychological problems. I liked her efforts to get beyond destructive behavior and learn to cope with stresses that bring her past to haunt her. There was a hint of a local romance development but then a different relationship was established which turned out better than I first expected.

There was some head hopping as the author shifted a few times to the view of the killer. That can distract the reader a little, but the story was fast paced and quickly moved beyond those points. The overall excitement of the story made it a page-turner, hold-your-breath at times, read for me. There was also humor that helped break the tension in a good way. I learned details about bomb materials and terrorist cells that were very interesting.

My undergraduate degree was in journalism so I enjoy stories involving journalists. I was reminded of The Pelican Brief as I read this. I really liked Alex's determination to get to the truth and I appreciated the support she got from her gruff boss. I highly recommend this book especially if you enjoy high suspense. It's rather a shame the cost is a bit pricey.


I selected this title through NetGalley and I am very glad that I did.
Posted by Martha Eskuchen at 5:00 AM