This is another dangerous adventure for Jack and his friends and fun reading. 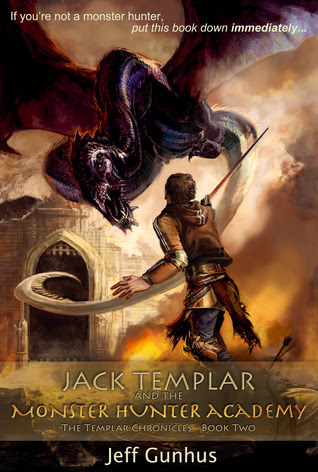 
Book Description
Publication Date: March 30, 2013
After barely surviving the onslaught of monsters that tried to kill him the day before his fourteenth birthday, Jack Templar leaves his hometown on a quest to rescue his father and discover the truth about his past. Joined by his friends Will and T-Rex, and led by Eva, the mysterious one-handed monster hunter, Jack sets out for the Monster Hunter Academy where he hopes to find answers to his questions. Little does he suspect that the Academy is filled with dangers of its own, many of them more terrifying than anything he’s faced so far.


Review:
Jack is determine to find out what happened to his father and to try to rescue him. His two awkward friends, chubby T-Rex and quick Will, might be unlikely fighters but they are determined to stick with Jack. They are being led by the skilled monster hunter, Eva, who showed up to train Jack the day before his fourteenth birthday, when he learned that he is from a long line of Monster Hunters.

The trip to the Monster Hunter Academy takes them over the ocean and through the mountains. They soon are facing dangers, including huge wolves led by a fierce giant wolf named Tiberon. Daniel, another Monster Hunter trainer, is intent on killing all of the wolves.  Jack has an encounter with Tiberon and chooses to help him rather than kill him.

Jack meets the ancient, wise leader, Aquinas, and other trainers and students. Daniel treats Eva as his girl which sets the two boys at odds right away. The other hunters and trainees watch Jack warily as they have heard the rumors about “the one true descendant of the Templars” who legends says can defeat the evil hordes of Ren Lucre who has his father.

Jack is more interested in finding answers about his father than committing seriously to the  training. He does make at least one new friend in a young boy, Xavier, who is a tinkerer creating ‘James Bond’ type gadgets and weapons. Some of those gadgets come in handy as Jack takes on a quest. When Jack returns successfully he discovers the Academy is under attack and he and his friends have to pull together to face the enemy.

I couldn’t help but notice that there are many similarities in the plot line with the first Harry Potter book. There are awkward but loyal friends, an interest in the strong, bright female companion, a wise leader who takes a special interest in Jack and many dangerous creatures. I enjoyed the action and liked that there are a few growing up lessons as the characters develop.

The story is very entertaining and there is clearly more danger and adventure to come. I think this book could be read alone but I recommend starting the series with book one (my review) so the reader has the full history of Jack’s background.

Since I can’t be certain that you read my first book about the night I found out I was a monster hunter, I should start out with a warning.
First, monsters are real. Vampires, werewolves, zombies, demons; you name it. In fact they are more common than you could ever imagine. Second, this book is not make-believe. This is a truthful account of my life as a monster hunter and the mysterious circumstances that seem to constantly surround me. Third, reading this book makes you fair game for monsters.
You heard me right: the simple act of reading this book will attract monsters to you and give them the go-ahead to attack. Usually, if you were under fourteen years old, you would be safe by the Law of Quattuordecim, an ancient truce between man and monster that protects non-combatant children on both sides until sundown on their fourteenth birthday. I blew it by attacking a monster that was trying to eat someone I knew the day before my birthday. You’re about to blow it by reading this book.
If you’re over fourteen, you are already at risk for monster attacks, but in reality they are few and far between. Still, by reading this book, you are guaranteeing they will come after you. So don’t come crying to me if a rock troll chops off your feet or a harpy eats one of your eyeballs.  The choice is yours.
However, if you decide to turn the page, you’ll be reading about the Monster Hunter Academy, a place no non-monster hunter has ever seen or heard about before. What happened there is not for those with weak stomachs or for those who are easily upset. There is blood and gore and death and, like it or not, some kissing. But there is also an adventure unlike anything you have ever seen before.
So turn the page if you dare. The adventure starts now.

I received this book for review as part of Book Blast BlogTour.

Orphan Jack Templar has no memory of his parents and only the smallest details from his Aunt Sophie about how they died. The day before Jack's fourteenth birthday, things start to change for him. At first it's great: A sudden new strength helps him defend his nose-picking friend "T-Rex" from the school bully, and even his crush, Cindy Adams, takes notice. But then a mysterious girl named Eva arrives and tells him two facts that will change his life forever. First, that he's the descendent of a long line of monster hunters and he's destined to be in the family business. Second, that there's a truce between man and monster that children are off-limits...until their fourteenth birthday! Jack has only one day before hundreds of monsters will descend on his little town of Sunnyvale and try to kill him.

As if that weren't enough, things get even more complicated when Jack discovers that the Lord of the Creach (as the monsters are collectively known) holds a personal grudge against him and will do anything to see that Jack has a slow and painful death. To stay alive and save his friends, Jack will have to battle werewolves, vampires, harpies, trolls, zombies and more. But perhaps the most dangerous thing he must face is the truth about his past. Why do the other hunters call him the last Templar? Why do they whisper that he may be the "One?" Why do the monsters want him dead so badly? Even as these questions plague him, he quickly discovers survival is his new full-time job and that in the world of monster hunters, nothing is really what it seems.

Jeff Gunhus grew up in Cyprus, Greece, and Saudi Arabia where there was a distinct lack of television. He quickly found books were the gateway to incredible adventures, fascinating characters and unbelievable discoveries. Now, with five children of his own (all who watch too much television, in his opinion), he has enjoyed revisiting his old books and reliving those adventures all over again.