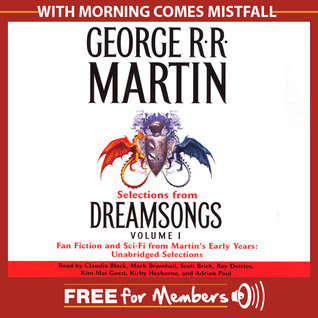 
This was a free download I picked up in 2011. I finished it at the end or May but failed to include it in my Monday Reading list and remembered when I saw it in my calendar for review.
A science fiction short story, first published by Analog magazine in May 1973. It was the first story by George R. R. Martin to be nominated for Hugo Award and Nebula Award.
Recently it was included in published in 2003 GRRM anthology
Dreamsongs collection: A RRetrospective (Volume I).


Review:
This is a really a lovely, dreamy, ethereal story - rather unexpected. I have not read George R. R. Martin's better known stories and I thought this might be a way to get a feel for the author.

The story is set by in the future where space travel is every day. There is a misty world on the planet of Wraithworld complete with a mysterious uncovered ancient civilization to explore, a resort castle and unexplained deaths. The story is told from the view of a female photo-journalist. She is following the scientific investigations of a man and his team who are intent on disproving the rumor of wraiths killing explorers.   Several visiting groups have suffered deaths leading to the rumors of wraiths. The resort owner is angry at the scientist. If the wraiths are proven then tourists may stay away due to danger and if they are dis-proven then the planet might become a destination for greedy investors. The scientist doesn't even realize that mistfall occurs in the morning and mistrise occurs at night but the photo-journalists is able to catch the ethereal beauty of the place.

This was only about 45 minutes long and the narration fits the ethereal mystery of the tale. I enjoyed both the beauty, mystery and political arguments presented from the impartial but sensitive view of the journalist. I do need to put the Song of Ice and Fire series on my TBR list.
Posted by Martha Eskuchen at 8:52 PM