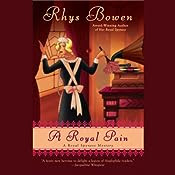 The Queen of England has concocted a plan in which penniless aristocrat Lady Georgie is to entertain a Bavarian princess and conveniently place her in the playboy prince's path, in the hopes that he might finally marry.

But queens never take money into account. Georgie has very little, which is why she moonlights as a maid-in-disguise. She must draw up plans: clean house to make it look like a palace; have Granddad and her neighbor pretend to be the domestic staff; un-teach Princess Hanni the English she's culled from American gangster movies; cure said princess of her embarrassing shoplifting habit; and keep an eye on her at parties.

Then there's the worrying matter of the body in the bookshop and Hannis' unwitting involvement with the Communist Party. It's enough to drive a girl crazy.


Review:
The Queen doesn’t realize the lack of Georgie’s fiances when she asks her (a cousin) to play hostess to a Bavarian Princess. The Queen is trying to get her son to change his affections from an older, married American woman to a proper person of worth. Georgie has to recruit her father and his friend to masquerade as butler and cook and she even coerces a friend to serve as a maid.

Princess Hanni arrives with her companion, a haughty Baroness. Princess Hanni, although supposedly taught at a convent, picked up English slang from watching gangster movies, plus she is extremely ‘man’ crazy. Georgie has her hands full pretending to maintain a proper household, discouraging the Baroness from inspecting things too closely and curbing the Princess’s slang and tendency to shoplift and chase after handsome men.

Georgie and Hanni almost become involved in a Communist protest at a visit in the park. They meet several handsome men, including the dashing Darcy who has already attracted Georgie even though she believes he is searching for an heiress. Georgie takes Hanni to a ‘Bohemian’ party of commoners. Hanni is thrilled to meet more handsome men, and to run into Darcy again. Unfortunately the evening is cut short when one of the young bucks tumbles through the balcony railing. Darcy manages to whisk Georgie and Hanni away before their attendance becomes fodder for the papers. But Georgie still has to face questioning by the police who are concerned about her presence at another death.

A few days later Georgie helps Hanni get to a private assignation with a young man who works at a bookstore in a seedier side of town. Georgie follows Hanni upstairs only to discover the young man, a Communist sympathizer, with a knife in his back!

The Queen decides that, while taking Hanni to a country party before an international incident arises, Georgie must also make time to investigate the murder(s). Darcy seems to always be in the wings-- or alley as the case may be–to come to Georgie’s aid. This is pleasing although perplexing particularly when Darcy begins to show additional attention to Hanni, making Georgie regret her decision to put off Darcy’s earlier advances.

There is more intrigue and killing before Georgie uncovers the bigger plot. She has to force her way to a last minute rescue and again Darcy is there to jump in front of the bullet. Georgie makes rash promises to Darcy hoping he won’t die.

Georgie’s dry humor and banter are very enjoyable. This is the second of the series that I have listened to and the stories are light, quick and fun listening.

AUDIO NOTES:  Katherine Kellgren does a really nice job with the narration, adding the different accents and emotions. Her delivery is smooth and enhances the easy story line making these fun to listen to.


This is a selection from my Audible Library.
Posted by Martha Eskuchen at 7:34 PM