Please help me welcome Barbara Bretton and enjoy the insightful answers provided in this Interview. 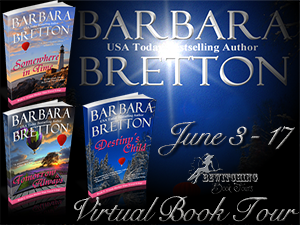 About the Author:
Barbara Bretton is the USA Today bestselling, award-winning author of more than 40 books. She currently has over ten million copies in print around the world. Her works have been translated into twelve languages in over twenty countries. Barbara has been featured in articles in The New York Times, USA Today, Wall Street Journal, Romantic Times, Cleveland Plain Dealer, Herald News, Home News, Somerset Gazette, among others, and has been interviewed by Independent Network News Television, appeared on the Susan Stamberg Show on NPR, and been featured in an interview with Charles Osgood of WCBS, among others.

Her awards include both Reviewer's Choice and Career Achievement Awards from Romantic Times; Gold and Silver certificates from Affaire de Coeur; the RWA Region 1 Golden Leaf; and several sales awards from Bookrak. Ms. Bretton was included in a recent edition of Contemporary Authors.

Barbara loves to spend as much time as possible in Maine with her husband, walking the rocky beaches and dreaming up plots for upcoming books.
WEB: www.barbarabretton.com
FACEBOOK:  www.facebook.com/barbarabretton
TWITTER:  www.twitter.com/barbarabretton
GOODREADS:  www.goodreads.com/Barbara_Bretton
RAVELRY:  www.ravelry.com/wickedsplitty

Learn more from Barbara's answers below:

Q1.  I have read some of your contemporary fiction and really enjoyed the easy flow. Now I am excited to read the time travels. Is there a big transition in your writing style from one genre to another?

BB:
Hi, Martha! Thanks so much for hosting me today. I love Q&A interviews.

Thanks, also, for the kind words about my contemporaries. Good question about writing style. I think my style is essentially the same from genre to genre with a few minor differences. (Word choice in historicals comes to mind.) I tend to write in a conversational style which (I hope) lends itself to easy, effortless reading. I don't want to get between the reader and the story.


Q2.  I love series and I am always curious: When you do a series do you have each book plotted out before you start the first one or do the subsequent books flow from the first book?

BB:
I'm taking a deep breath here before I plunge ahead with the answer. The truth? I don't plot. I was a great plotter with my first ten books and then something happened (A comet? A meteor?) and suddenly I didn't want any part of plotting. I went from plotter to what they currently call "pantser" in the blink of an eye. There was something very comforting about having an outline to follow but that same sense of comfort also deadened the excitement. At least it did for me. I love not knowing what's going to happen when I hit the keyboard.

And here's another dark truth: I never once planned to write a series. In each instance I had a single, clear idea and a passion to write it that I guess transmitted itself to my publishers who (to my delight) subsequently asked for me to continue the storylines.


Q3.  What most inspires your plots?

BB:
So many things! The Time Travel trilogy came to life when a hot-air balloon landed in the parking lot of my parents' condo. My Sugar Maple series sprang to life in my dentist's waiting room. I was leafing through a brochure on dental implants (fun reading, right?) and found myself wondering what happens to a vampire with tooth troubles. Sometimes it's a whisper of conversation overheard in a diner or a photograph in a magazine that lingers long after I've turned the page.


Q4.  If you could jump into a book, and live in that world, which would it be?

BB:
Right now I'm re-reading Robert B. Parker's Spenser novels so I'd probably like to be transported to his fictional Boston and be Susan Silverman for a day. And I'm almost (but not quite) embarrassed to admit that it would be fun to be the heroine of one of Victoria Holt's wonderful classic Gothic novels. Maybe I could be the Bride of Pendorric or Mistress of Mellyn. I cut my romance-reading teeth on those books when I was a teenager and I still love them.


Q5.  Have you had to do any unique research or what was one of the most surprising things you learned in researching for any of your books?

BB:
Some years ago I was lucky enough to be chosen to participate in Harlequin American's Century of American Romance project, a series of romances each set in a different decade of the 20th century. It was an ambitious project and we were all over-the-moon excited about it. I was given the privilege of writing about the 1940s and 1950s which meant some of the best research opportunities of my life. I had always loved my parents' stories about World War II and this gave me the chance to sit down and really listen. Not as a daughter but as a writer.

Be careful what you wish for! My dad's stories were mostly about being a Sea Bee in New Guinea, but my mom's were filled with Manhattan in the 1940s, of whirlwind romances and being a real life Rosie the Riveter and dancing the night away at the Stork Club  and Copacabana. I'd heard the stories a thousand times before but this time I listened differently and the past became as real to me as the world I was living in.

And then came the Big Surprise. My mom had been engaged twice before she met and fell in love with my father and one of those men died in Europe during the War. The funny thing is, it wasn't my mother who told me. It was my dad. She was furious that he'd blurted out her "secret" and distraught that I might think less of her.

Think less of her?! It only made me want to hear every single story she had to tell.

My parents both died in 2001 (within four months of each other) and I'm so grateful I had the chance to sit down and really listen to the stories of their lives when I had the chance.


Q6.  How do you handle it when some element of what you're writing decides that it just doesn't want to work the way you want it to?

BB:
Like any professional writer: first I cry, then I reach for the chocolate.

Once I emerge from my chocolate coma, I sit down and take a hard look at the material and nine times out of ten I discover that I made a wrong turn somewhere along the line and I have to take a scalpel to the manuscript and slice my way back down to the bones of the story.


Q7.  You have been writing for many years. Is there anything you see that is different in style or writing technique or tools from when you first became published?

BB:
Where do I start?? I've been re-reading some of my older books recently (think early to mid 1980s) and the difference in style and technique is astonishing. Technology has changed so dramatically in the last 30 years that most plot twists could be eliminated with a cell phone call or a minute with Google. But beyond that I'd say the long-winded descriptions of clothing and food have been stripped to the bone . . . and in a good way. Female characters are stronger, more independent. Male characters, even our beloved Alpha males, have been forced to adapt to the changing social landscape.

Storytelling is faster-paced, leaner, more dialogue-heavy than narrative-rich. I've often wondered if that's partially a result of creating on a computer. I wrote my first books by hand then typed (yes, typed!) them at the kitchen table on an old IBM Selectric. This was back in the days when you had to make sloppy, annoying carbon copies and sit there painstakingly daubing Liquid Paper over your typos. While I wouldn't want to go back to the pre-computer days, I have to admit there was something very satisfying about watching that stack of pages mount up.

Research meant a trip to the library and maybe a long wait for special order volumes to be delivered. Communication with publishers was snail mail. Writers haunted their mailboxes for acceptance checks or the dreaded rejection letters. A writer's life revolved around the post office: sending off our work, waiting to find out what The Powers That Be thought of it.


Q8.  Which character did you have the most fun with in the Time Travel trilogy, and why do you choose that character?

BB:
My smart-mouth psychic librarian Dakota Wylie, hands down. She popped up early in TOMORROW & ALWAYS and I was a goner. There's something about secondary characters that seems to free a writer and make them much easier to write than the primary characters. Dakota is funny, painfully honest, curious about this world and what may lie beyond, unlucky in love, addicted to donuts, and willing to grab hold of adventure when it comes her way. What's not to like? Dakota didn't come with the romantic baggage Emilie and Shannon brought with them and that was part of what made her such a delight. She was as close to a clean slate as I was ever going to find. So it was pretty much of a no-brainer when she got her own book and her own hero, DESTINY'S CHILD, Crosse Harbor #3.


Q9.  What three words would you use to describe yourself and your personality?


Q10.  If you could have readers finish a sentence what would it be?


Thank you so much for taking time to share (both your writing and this interview) with readers.

BB:
It was my pleasure entirely. This was fun! Besides, we Marthas have to stick together.
--Barbara Martha Anne Bretton

Isn't that cool she shares my name too!

Visit all the tour stops linked at Bewitching Book Tour.

Somewhere in Time is currently free for download from iTunes, Amazon, Smashwords. It can be downloaded in all formats from this Smashwords link.

ENTER THIS GIVEAWAY for an AUDIO VERSION OF SOMEWHERE IN TIME - Digital Format:

ENTRY FORM HERE
Don't forget to fill in the form for entry!
I have noticed a few commentors who forgot to enter through the Form.

* This contest is open to anyone who can download digital audio.
* This contest will close 10 PM (Central) on June 21, 2012.
The winner will be randomly selected from all entries.
WINNERS WILL BE ANNOUNCED on June 22, 2012.
Winners will have 72 hours to respond by email or the winners form linked in the announcement.
Posted by Martha Eskuchen at 5:01 AM