Audio Book Review: And They Called Her Spider by Michael Coorlim

This is a fun, quick listen!

And They Called Her Spider:
A Bartleby and James Adventure, Book 1 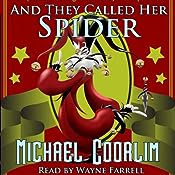 
Publisher's Summary
The Bartleby and James Adventures steampunk mystery series follows the cases of consulting detectives Anton Bartleby and James Wainwright through an alternate Victorian history.
In their debut adventure, London is in the grip of an unstoppable assassin known only as the Spider, and consulting detectives James Wainwright and Alton Bartleby have been commissioned to catch her.

Can the surly inventor and savvy gentleman track her down and stop her string of murders, or will Queen Victoria be her next victim?

Who Are Bartleby and James?
Alton Bartleby is a social savant, the scion of a once proud and noble bloodline, working to restore his family's name. James Wainwright is a brilliant engineer and inventor. Together they take on the cases that Scotland Yard cannot or will not handle.
©2011, 2012 Michael Coorlim (P)2012 Michael Coorlim


Review:
Alton Bartleby and James Wainwright work together as private detectives consulting, but not always welcome, with the authorities in a Steampunk Victorian world. Alton is all that is proper with his noble background and worldly social experiences, but he is in the position of having to work to rebuild his family reputation. James is a quirky engineer and inventor who can get lost for days in his laboratory, 'lair', before popping out with a solution or gadget to help in their investigations.

Alton and James have been called upon to help track and stop a sly assassin who is known as the Spider. She has been able to slip into places, through crowds and windows, where with acrobatic grace and moves she decimates her prominent victims with venomous dagger strikes. Then she boldly and blithely waltzes away to her escape.

There is a fear that the Queen is an intended victim and the detectives are in a race against time to stop the Spider. Once they have a clue to follow they press on diligently, even with some recklessness.

This pair reminded me of a lighter Sherlock Holmes and a more technically skilled Dr. Watson. The story is told from the view of James. They make a good pairing and balancing in their intuitive and deductive skills as well as their areas of experience. The story was fun and I loved the steampunk and mechanical aspect.

Audio Notes: The narrator presents the story with perfect British hauteur and aplomb. The pacing, of the story as written and read, is brisk and intriguing. I would be glad to read more by Mr. Coorlin and hear more narrating by Mr. Farrell.

This is a good choice for mystery buffs looking for a fun, fast hour.


I received this MP3 download at Audible through AudioBook Jukebox.
Posted by Martha Eskuchen at 6:32 PM