This is action packed adventure and very enjoyable entertainment!  Love adventure? Treat yourself to this book, which is actually two books in one. 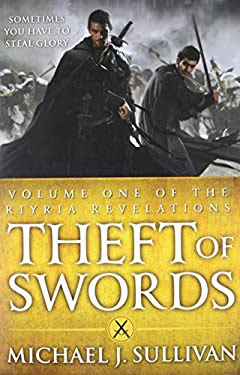 Product Description
THEY KILLED THE KING. THEY PINNED IT ON TWO MEN. THEY CHOSE POORLY.
Royce Melborn, a skilled thief, and his mercenary partner, Hadrian Blackwater, make a profitable living carrying out dangerous assignments for conspiring nobles--until they are hired to pilfer a famed sword. What appears to be just a simple job finds them framed for the murder of the king and trapped in a conspiracy that uncovers a plot far greater than the mere overthrow of a tiny kingdom.

Can a self-serving thief and an idealistic swordsman survive long enough to unravel the first part of an ancient mystery that has toppled kings and destroyed empires in order to keep a secret too terrible for the world to know?

And so begins the first tale of treachery and adventure, sword fighting and magic, myth and legend.

When author Michael J. Sullivan self-published the first books of his Riyria Revelations, they rapidly became ebook bestsellers. Now, Orbit is pleased to present the complete series for the first time in bookstores everywhere.

Review:
Thieves are not always likeable...but sometimes they are. This is one of those stories. Royce and Hadrian are somewhat like Robin Hood as they tend to steal from the rich and help the poor. They are clearly thieves for hire and have been known in the past to be assassins. Royce was once a member of a well known thieves’ guild. However his successes made someone jealous and fearful so they set him up and got him banished. When he and Hadrian started working together, independent of any guild, they became known as the Riyria - successful and daring thieves who managed always to escape.

They have just returned from a successful job, particularly in light of a double play. They would not normally take another assignment immediately but their greed lets them get talked into the job of stealing a famous sword. Unfortunately for them when they enter the chapel to get the sword they find the King murdered and suddenly they are accused, captured, gagged and sentenced to execution by the Prince without even the chance to speak out.

A surprising source helps them escape provided they kidnap the Prince, for his own protection, and sent off on another adventure. They are hunted criminals with an unhappy companion who takes some understandable convincing of their good, or at least not malevolent, intent.

This story is packed with action and made me think of other great adventures like Robin Hood, Lord of the Rings and others.  There are elves, who are hated and abused. Myths that add to the story. There is a masterful, all but forgotten wizard with riddles and secrets. There are multiple suspects in the King’s daughter, who has studied sorcery and in the King’s brother, who might be protecting the Prince or plotting against him. No sooner do Royce and Hadrian rescue the Prince, a second time, than the Prince must send them out for another, seemingly impossible, rescue. All of the danger is part of a bigger political intrigue and villainy as nobleman and church leaders battle for power.

Theft of Swords contains The Crown Conspiracy and Avempartha, the first two novels in the series.  I was very glad that this story consisted of two books as I wasn’t ready for the adventure to end with the first part. In the second book Royce and Hadrian are sought out by a young farm girl who seeks their services to save her father and village from the biggest, “baddest” (okay that’s not a real word but it fits) beast. She doesn’t have enough coin to pay their fee but their kind hearts are pulled into her plight.

I truly enjoyed these characters and liked that we learned some, but not all their history and secrets, as they struggle through their obstacles. The writing has a good flow that fit with the action. The descriptions bring the scenes alive. The second book ends with a big question that makes me want to get the next book sooner, although I already wanted to get it.  If you enjoy action packed fantasy stories I highly recommend this!

Descriptions to enjoy:
Myron, a monk who had never been outside of the abbey thinks this as he travels with Royce, Hadrian and the Prince:


He had seen snow, of course,... He never had seen how it settled on a forest or glittered on the edges of rivers and streams. Location 3166

The incredibly lustrous blade of Pickering's rapier caught the faint light in the corridor and glowed as it streaked through the air. It flashed and sparked when steel met steel. Location 3439.


Received for review from Orbit through NetGalley.
NOTE to my followers:
New feature: At the end of each month I will be hosting a monthly giveaway of a favorite book that I read that month - most likely books that are not already part of a giveaway. The Theft of Swords is likely to be my pick for February, although the month and reading isn't over yet. I may (possible but not guaranteed) be influenced by comments. So you might want to comment on reviews for books you are particularly interested in as it may effect my choice plus review comments will earn extra credit. :-)
Posted by Martha Eskuchen at 1:23 PM