This is a good swashbuckling action, historical romance. 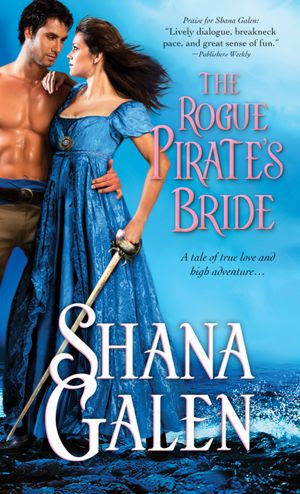 "Galen pulls out all the stops, striking a balance between romance and adventure that will leave readers breathless and highly satisfied."
—RT Book Reviews

REVENGE SHOULD BE SWEET, BUT IT MAY COST HIM EVERYTHING

Out to avenge the death of his mentor, Bastien discovers himself astonishingly out of his depth when confronted with a beautiful, daring young woman who is out for his blood...

FORGIVENESS IS UNTHINKABLE BUT IT MAY BE HER ONLY HOPE...

British Admiral's daughter Raeven Russell believes Bastien responsible for her fiancé's death. But once the fiery beauty crosses swords with Bastien, she's not so sure she really wants him to change his wicked ways...

Review:
I enjoy this type of historical romance with lots of action, strong and warm characters and a sensual romance that has heat but isn’t too graphic.

Raeven Russell is no debutante or high society miss. She is the daughter of a British Admiral who has been raised on board and knows more of ship’s rigging and sword play than she knows of ballrooms and ladies’ fans and flirtation. Raeven has a fiery temper and is set to revenge the death of her beloved fiancé’ a young Captain who died after an encounter with the famed pirate, Captain Cutlass.  Actually “Cutlass”, Bastien, is a privateer with papers from Spain but Raeven thinks of him as a blood thirsty, villainous pirate.

Bastien is a French nobleman who escaped as a child during the French Revolution. He believes that his twin and other family members were killed in the firing of their estate. He alone escaped with a trusted family stableman, Gaston, who remains with him now as his ship’s doctor. Bastien learned his sailing skills under a master who was betrayed and killed by Jourdain. Now Bastien seeks revenge against Jourdain and his ship the La Sirena.

Though Raeven ties to duel with Bastien, he initially tries to fend her off and keep her away from his ship. She repeatedly puts herself in his path and inadvertently becomes kidnapped, along with her father’s purser, Percy, who has been dragged along on her ill fated adventures. As Bastien tries to run down Jourdain he has to worry about the British navel sailing down his own neck to rescue Raeven, even if she is no longer clamoring for rescue.

There are battles on land and sea to give this story lots of action. There is the clashing of personalities between Raeven and Bastian as they face off and inevitably come together through the chemical pull of attraction for danger and excitement that they see in each other. The writing has an easy flow with good descriptions and fun dialogue. I enjoyed all the physical and emotional action that made this a fast paced, up beat read.

Quotes I liked:
Raeven to Bastien as they battle wills:
"If you are trying to seduce me, you are sailing in the wrong direction." Location 1744.

Bastien about Raeven as they surrender together:
It was about them, together, the connection between bodies and—he looked into her eyes—hearts. Location 2644.


Thank you to  Sourcebooks for this book to read and review through NetGalley.
Posted by Martha Eskuchen at 12:00 PM