Book Review and ARC Giveaway: The Rook by Daniel O'Malley

This book is suspenseful, strange and engaging! 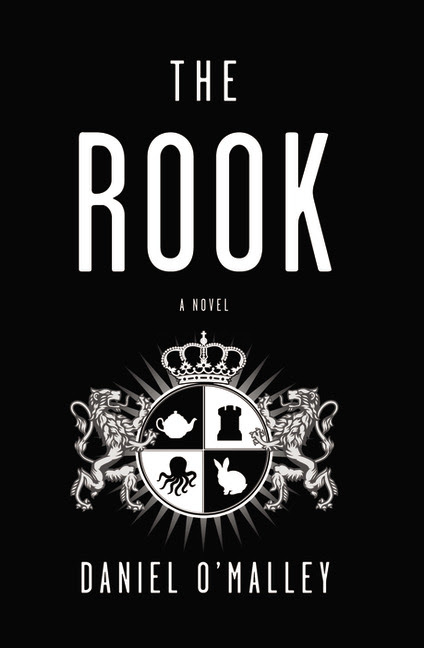 
Book Description
Publication Date: January 11, 2012
"The body you are wearing used to be mine." So begins the letter Myfanwy Thomas is holding when she awakes in a London park surrounded by bodies all wearing latex gloves. With no recollection of who she is, Myfanwy must follow the instructions her former self left behind to discover her identity and track down the agents who want to destroy her.

She soon learns that she is a Rook, a high-ranking member of a secret organization called the Chequy that battles the many supernatural forces at work in Britain. She also discovers that she possesses a rare, potentially deadly supernatural ability of her own.

In her quest to uncover which member of the Chequy betrayed her and why, Myfanwy encounters a person with four bodies, an aristocratic woman who can enter her dreams, a secret training facility where children are transformed into deadly fighters, and a conspiracy more vast than she ever could have imagined.

Filled with characters both fascinating and fantastical, THE ROOK is a richly inventive, suspenseful, and often wry thriller that marks an ambitious debut from a promising young writer.

Review:
This is a good thriller with very unique and strange characters.

Myfanwy Thomas wakes up and doesn’t know who she is until she finds a letter in her pocket. The letter starts “The body you are wearing used to be mine.” Thus begins a learning process for Myfanwy to learn about her former life and job. This is no easy task since “Thomas”, as she dubs her former self, is a Rook and the administrator for a very secretive government agency that hides supernatural creatures and events from the public and battles supernatural forces. Each team operative has their own supernatural ability to aid the organization.

Myfanwy quickly becomes immersed in on the job training with some help from a handy notebook prepared for her by Thomas. The notebook defines the organization, identifies the other operatives by name, title, responsibility, super power and personality quirks. Myfanwy doesn’t even know her own unique gifts until she accidentally uses them and begins to learn to expand and control them.

While Thomas was super organized she was also obsessively plain, neutral and timid. She had learned not to touch as she apparently can injure or even kill another person with just a touch. Although Myfanwy can dress like Thomas she has a hard time being timid. She is ready to face any challenge, the biggest one being  to discover who wiped out her memory and why. This task is extra difficult since she has no idea who, if anyone, she can trust.

The team of operatives is soon faced with an ancient foe, The Grafters. Hundreds of years before they were creatures that were mostly blobs that were sent to take over a portion of England. They were defeated and thought to have been destroyed. Instead it appears that some survived and have become a dangerous group that grafts themselves into new forms and is infiltrating the Organization.

I really enjoyed the way the author sets up the discovery of information through Thomas’ letters and notebook. There were occasions when characters were introduced through a scene before they were disclosed by Thomas’ information. This caused a little confusion as I had to flip back a few chapters later to make sure who the character was.

I loved Myfanwy’s character with her bravery, determination and growing, or emerging, strengths. I also enjoyed discovering her quirky allies and laughed at many of the crazy enemies and scenarios that Myfanwy stumbles into. The mystery is full of suspects and twists that kept me eager to read as I wondered what would happen next. This is a fun and different read that is a good break from romance reading!

Thank you to Little Brown and Co. for this book to read and review.
This book is set in London, England for my Where Are You Reading challenge.  This will also go on my ARC and New Author challenge lists.


TO ENTER THIS GIVEAWAY for the ARC copy:

1. Visit the author site and tell me something of interest you found there.  This is required for entry.


* This contest is only open to residents of US and Canada.
* This contest will close 10 PM (Central) on February 10, 2012.
The winner will be randomly selected from all entries.
The WINNER WILL BE ANNOUNCED on February 11.
Winners will have 72 hours to respond by email or the winners form linked in the announcement.