This is very engaging with strong protagonists. 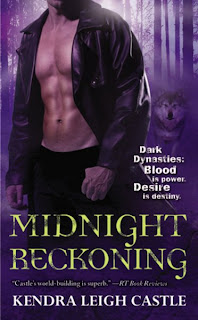 Product Description
Two separate worlds . . .
One passion that binds them

Wild and passionate by nature, Lyra Black is not just any werewolf. She's the future leader of the powerful pack of the Thorn-if she can stay alive long enough to inherit the title.

One of the Cait Sith bloodline of vampire cat-shifters, Jaden Harrison has no interest in the wars plaguing the world of night. But when he rescues Lyra from a violent attack, they're both captured by an insatiable desire that threatens to overwhelm them and bind them together for eternity . . . just as ancient enemies prepare to strike. And when they do, the Thorn and the Cait Sith-and Lyra and Jaden's love-may never recover from the deadly blow . . .


Review:
Lyra Black is the only child of her father, the Alpha leader of the Thorn werewolf pack. She is beautiful, smart and pretty much fearless. She is determined to participate in the Proving where the werewolves battle for the right to become the next Alpha of the pack.  The problem is that her father and friends refuse to train her to fight and she is seriously out “manned” by the bigger wolves, especially her cousin, Eric, who has a very nasty reputation. Even though there are concerns that Eric’s leadership would be repressive, it is the tradition of the pack that they conform to the leader.

Jaden is a powerful vampire cat-shifter who has recently been freed from a live of slavery. He met Lyra briefly once before and hasn’t been able to get her off his mind. He stumbles upon her and rescues her when she is attacked by a larger wolf. He is so intrigued that he decides to help train her to fight in ways that are suitable to her slight build - flexible and fast.  Although they are two different species and have no business wanting to be together the attraction is undeniable.  Jaden thinks that maybe he has found a woman who is strong enough for him.  But if Lyra dares to succumb she will be driven from her pack and lose everything she has ever loved.

As they struggle with fulfilling or losing their individual dreams, Jaden has to duck attacks from an old enemy. Meanwhile the pack doesn’t know that there is one among them who is leading them toward destruction.

These are both wonderfully strong characters caught in lonely lives. I was rooting for them all along hoping they could overcome the difficulties and be able to be together. There is plenty of action, emotional and romantic conflict, with sensual interaction leading to a sexy union. The writing is easy and there is underlying humor that makes the reading even better.  I’m sorry I missed the first book in the series and hope to pick that up as well as additional books by this author.

A couple of passages I liked:
"When you were a vampire, especially a lowly shape-shifting cat of a vampire, deadly kisses were sort of your stock and trade." p 2
"[Lyra had] been so worried about shaping her own destiny she'd nearly missed the best parts that fate had sent her."  p 331

Thank you to Forever Romance for the book to read and review.
This is set primarily in Silver Falls, NY for my Where Are You Reading Map.
I will add this to my ARC and New Author challenges.


Check out the Author mini-Interview and Giveaway post for a chance to win this book together with Firelight by Kristen Callihan - two great reads!
Posted by Martha Eskuchen at 6:30 AM