This is a fun, fast read with lovely illustrations; good for adult or young readers.

My Sparkling Misfortune
by Laura Lond
Gernre:  YA, Fantasy
My Rating: 4.5 of 5.0

Lord Arkus of Blackriver Castle readily admits that he is a villain and sees no reason why it should stop him from being the protagonist of this book. After all, Prince Kellemar, an aspiring hero, has defeated him in a rather questionable way. Bent on revenge, Arkus attempts to capture a powerful evil spirit who would make him nearly invincible, but a last-minute mistake leaves him with a Sparkling instead--"a goody-goody spirit that helps heroes, watches over little children, and messes up villains' plans." Bound to Lord Arkus for five years of service and sworn to act in his best interests, the Sparkling is not easy to get rid of, and of course his understanding of "best interests" is quite different from what Lord Arkus has in mind.


Review:
Lord Arkus loves being a villain known as Arkus the fearsome and Dreaded Lord. Prince Kellemar is a neighboring enemy and would be hero.  Kellemar flatters and tempts Arkus to steal a gold stash. The plotting Prince has set a trap so that just as Arkus is about to retrieve the prize he is faced with the beast that is set on killing him. Arkus usually escapes the beast by running to the white towers where the beast won’t go but Prince Kellemar has destroyed the surrounding towers! Arkus runs far away to escape.

Prince Kellemar claims that he killed the infamous Lord Arkus and Arkus wants revenge. But Arkus can’t return until he heals and finds a way to stay protected from the beast. Arkus decides to capture an evil spirit, a mighty Gormak, to give him power. Instead the creature he captures is a “sparkling”, which is a good spirit who only helps heroes. Arkus doesn’t think he can use the help of the sparkling, whom he names Jarvi, until Arkus discovers that Jarvi can be very helpful by preforming three miracles each day. The trouble is that Jarvi cannot do any evil or harm.

Jarvi finds a way to twist Arkus’ evil intentions to something good and suddenly, against his own wishes, Arkus rescues the local Princess and becomes a hero known as the Lakeland Knight. The ambitious Prince Kellemar appears as the fiancé of the Princess and tries to expose Arkus as a villain. With a twisted irony, Kellemar is now becoming a villain while Arkus remains a hero. When Kellemar kidnaps Arkus friend, the young prince of the local royal family, Jarvi offers his special sword to help Arkus. Arkus may be able to use the sword to defeat the Kellemar and the ever hunting beast, but his victory may cause great injury to Jarvi.

The story is told by Lord Arkus in a first person account of his life and adventures. It is quickly clear that Arkus is a likable villain and you wonder what set him off on the path of misdeeds. There are hints of an event where he lost a childhood friend but the details are not revealed in this book. It is heartwarming to watch as Jarvi shows Arkus how to trust and do good. Jarvi is an absolutely adorable character. He is a cross between an angel and a genie with a joking, prankster attitude. I have to say he almost steals the spotlight from Arkus, although he doesn’t mean to.

This is a good book for an older child and it is entertaining for adults too. My only disappointment was the ending which seemed very abrupt, leaving open questions  which can only be answered by the next book.


There are no heroes without us villains. Location 51


Blatant flattery, I noted. He must want something. Location 70.

I received this book to review as part of Bewitching Blog Tour.
Please learn more about the author in the Interview with a Giveaway in the next post.
I will add this to my ARC and New Authors challenges. 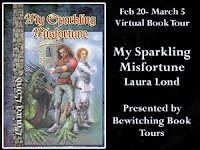 DriveThruFiction: http://www.drivethrufiction.com/product_info.php?products_id=97527
Posted by Martha Eskuchen at 6:30 AM