Audible Book Review and Print Giveaway: The Devil Who Tamed Her by Johanna Lindsey

This is a Taming of the Shrew tale with a Regency beauty. 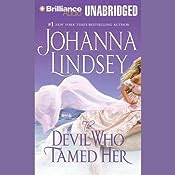 The Devil Who Tamed Her
by Johanna Lindsey


Publisher's Summary:
Ophelia Reid is an incomparable beauty with a reputation for starting rumors and spreading them. Having purposely wrecked her engagement to Duncan MacTavish, a future marquis, which her social-climbing father arranged, Ophelia wants to return to London's marriage mart and make her own choice of a wealthy husband.

But on her journey home, something unexpected happens. The heir to a dukedom, Raphael Locke, Viscount Lynnfield is - in spite of his disinterest in marriage - the most sought-after young lord in England. He instantly disliked Ophelia when she caused a scandal to avoid marriage to his friend MacTavish, but having comforted her in a tearful moment, he begins to wonder if she's not all bad. So when MacTavish claims that Ophelia will never be anything but a spiteful beauty, Rafe bets his best friend that he can turn her into a kind-hearted lady who will one day make a good match, just not with him.

With her parents' blessing, Rafe commandeers Ophelia's coach and whisks her - chaperoned, of course - to his remote estate in the countryside. There, as he tries to show his furious, sharp-tongued "guest" the error of her ways, he discovers the surprising reasons for her bad behavior.

Soon his daily lessons with Ophelia take effect and he finds himself irresistibly attracted to her. When Rafe champions the new and improved Ophelia's re-entry to London society, marriage proposals pour in. Only then does Rafe start to wonder whether he hasn't gone and fallen in love with Ophelia himself.

Review: Some things I liked; others not so much.
The summary gives you a good picture of the story but doesn’t reveal the charm in Ophelia’s transformation. I tried to remember Ophelia from the first book (The Heir

) but I had read that quite some time ago. Although she is presented as a vain, selfish and manipulative creature you quickly learn that she is hiding her loneliness and pain behind that termagant presence. You begin to feel some sympathy for Ophelia and she is likeable when she lets down her airs and allows herself some natural wit and fun. But the character is also annoying in her foolishness and spiteful temper which hurts her as much as anyone else.

Rafe is handsome and sexy. He has some good traits - loyalty and caring of a sort. But he has a mean streak and doesn’t make much effort at integrity. He pulls no punches telling Ophelia her faults. He helps Ophelia  to discover an outlet for her temper in other passions which are really inappropriate in the way she decides to indulge them with Rafe’s help.

When their reckless behavior results in Rafe’s father insisting that he marry the girl he takes his anger out on her. Even though he may like her he really isn't ready to marry. He convinces himself that she has reverted to her malicious, gossipy ways and he takes rash action which is designed to really hurt her. Not nice.

The ending is even more of a contrivance than Rafe abducting Ophelia. Through a tragic accident Ophelia finally is reconciled with her parents, especially her ambitious father, and Rafe finally acknowledges that he loves her. But I can’t say that "all is well that ends well" because, due to anger and spite, there are missed opportunities and missed events that can’t be redone.

The narration was fair - it didn’t enhance the story but neither did it detract too much. All in all the story and the narration are okay but they lacked real pizzazz.  I am a Lindsey fan having read a good number of her books and collecting all the rest (28 up to 2008) in a TBR box. The sexual content in this 2007 book is a bit more bold than in some of her earlier books. This one is okay but not my favorite.

1.   The author doesn't seem to have her own website but has a section at Fantastic Fiction For your entry, tell me if you have read this author and what you think about her books.  If you have already read this one, please tell me about it and if you win this giveaway you may pick from the review or ARC books and I'll award the book to another winner.
Please leave your e-mail!

3. For two extra entries, blog, facebook, tweet (any of those networks!) about this giveaway and tell me where you did.

(Four total entries possible.)
It isn't necessary to use separate entries unless you want them in different chronological order.

* This contest is open US and Canada only.
* No P.O. Boxes Please - for shipping reasons.
* This contest will close 10:00 PM (Central) on June 17, 2011.
The winner will be randomly selected from all entries.
Posted by Martha Eskuchen at 6:30 AM