I love when history and geography are wrapped in a fun read! 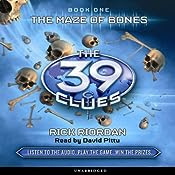 Product Description
What would happen if you discovered that your family was one of the most powerful in human history? What if you were told that the source of the family's power was hidden around the world, in the form of 39 Clues? What if you were given a choice - take a million dollars and walk away...or get the first Clue? If you're Amy and Dan Cahill, you take the Clue - and begin a very dangerous race.

Review: This book is like Where in the World is Carmen San Diego meets Rat Race or It’s a Mad, Mad, Mad World. Oh and lets not forget National Treasure too.

The elderly Cahill matriarch dies leaving a huge fortune and mystery. Instead of dividing the wealth among her many heirs, she leaves a Will that allows the heirs to choose: Walk away with a million dollars or take a clue that will lead to an amazing but undisclosed treasure.  Many people take the money but a few brave individuals and families opt to follow the clues.

Amy is a timid, but intrepid, 13 year old. She was very close to her grandmother and knows that Gram would want her to find the treasure. Dan is a 10 year old math whiz who has a hard time sitting still. The children have been living with a critical and unpleasant Aunt since their parents died.  Although the Aunt wants them to take the money (which of course she would ‘hold’ for them), the kids decide to take the clue as a team.

The clue sets them off solving riddles that lead them through haunts of Benjamin Franklin. They have to use their combined skills to figure out history clues and numeric puzzles.  There are shaky alliances with other family members but they learn pretty quickly that they can’t trust anyone as they narrowly escape one attack after another.

I used to love playing Where in the World is Carmen San Diego and similar history or geography games .  The clues are tricky enough for adults and might require a child to do some research but that is a positive learning point.  There is a website to join and get hints too. The plot is fun and the characters are diverse with a devoted butler, devious Uncles, jealous cousins, enthusiastic if bumbling family teams.  Some of the chase gets a bit wacky but I doubt that would bother a middle grader. Each clue centers around a different historical figure or event and I think that is a fun way to learn.

The narrator does a nice job with the voices and the excitement. The books have trading cards with puzzles that would give a challenge for middle graders so it might be more fun to get the actual books. But you will have to get all 10 books to solve the mystery. I enjoyed the listen and at some point will continue with the series but I have some other series that have my attention more right now.