This is a gripping thriller!
Deep State
by Chris Hauty 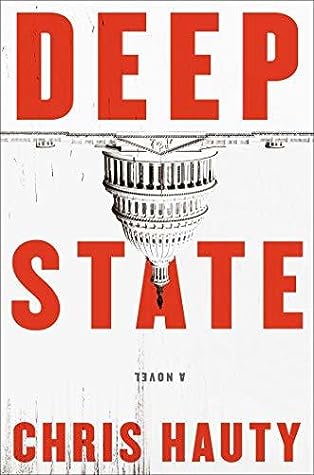 Recently elected President Richard Monroe—populist, controversial, and divisive—is at the center of an increasingly polarized Washington, DC. Never has the partisan drama been so tense or the paranoia so rampant. In the midst of contentious political turf wars, the White House chief of staff is found dead in his house. A tenacious intern discovers a single, ominous clue that suggests he died from something other than natural causes, and that a wide-ranging conspiracy is running beneath the surface of everyday events: powerful government figures are scheming to undermine the rule of law—and democracy itself. Allies are exposed as enemies, once-dependable authorities fall under suspicion, and no one seems to be who they say they are. The unthinkable is happening. The Deep State is real. Who will die to keep its secrets and who will kill to uncover the truth?


Review:
Haley Chill is a former Army boxer who is now serving her country as a government intern. She is pleased to be assigned to the White House chief of staff even if it means she is relegated to a cramped desk in the basement. The other interns access this mousey newcomer and don’t see much threat. They are more than willing to let her work the late hours and finish their work. Then they are surprised when she is called in to stand with the chief of staff for face to face work and meetings.

Haley likes the chief of staff and is only a little surprised when he warns her that if either he or the president (disruptive to the status quo) end up dead, it wouldn’t be natural or suicide. She is told, “Trust no one.” Shortly thereafter Haley finds the chief of staff dead. She discovers a single clue that indicates the death wasn’t natural. But who can she trust with this information? She doesn’t want to trust the FBI and she doesn’t plan on telling the Secret Service short term boyfriend whom she is about to break up with.

When Haley is attacked and barely escapes, she ends up sharing her secrets with a new friend, another White House staff worker. Then another man ends up dead. Haley knows the Deep State is at work and the president is in danger. She is on a race to get to the president to warn him before the killers act again.

I loved this gripping thriller. The characters are well developed and the plot has some zingers. I had to get accustomed to the writing style which presents future events in the lives of the characters. I would compare these to facts sometimes disclosed at the final credits of a movie. Although that was a bit unusual, it worked and even helped create a little extra intrigue. The story moves with action and the tension builds to exciting twists. There is some foul language and use of the Lord’s name which I didn’t like. Still, I was able to slide over those pretty quickly. I highly recommend this to readers who enjoy a good thriller with twists.