This is really remarkable! I wish this had been my First Book for 2020.

The Oracle
The Jubilean Mysteries Unveiled
By: Jonathan Cahn
Narrated by: Michael Beck 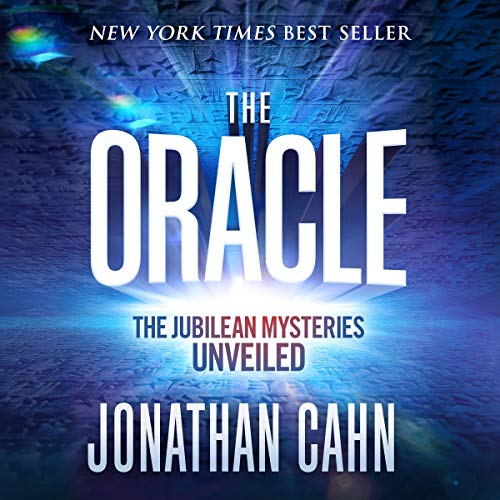 Publisher's Summary
New York Times and USA Today Best Seller!
Discover the amazing secret of the ages...and the mystery of your life!
The Oracle will reveal the mystery behind everything...the past, the present, current events, even what is yet to come! Open the seven doors of revelation - and prepare to be blown away!
Jonathan Cahn, author of the New York Times best sellers The Harbinger, The Mystery of the Shemitah, The Book of Mysteries, and The Paradigm, now unveils The Oracle, in which he opens up the Jubilean mysteries and a revelation so big that it lies behind everything from the rise and fall of nations and empires (even America), to the current events of our day, to the future, to end-time prophecy, and much more.
Could an ancient prophecy and a mysterious ordinance given in a Middle Eastern desert over three thousand years ago be determining the events of our day?
Could some of the most famous people of modern history and current events be secretly linked to this mystery-even a modern president of the United States?
Could this ancient revelation pinpoint the events of our times down to the year, month, and day of their occurring?
Could a mysterious phenomenon be manifesting on the world stage on an exact timetable determined from ancient times?
Could these manifestations have altered-and now be altering-the course of world events?
Jonathan Cahn takes the listener on a journey to find the man called the Oracle. One by one each of the Jubilean mysteries will be revealed through the giving of a vision. The Oracle will uncover the mysteries of The Stranger, The Lost City, The Man with the Measuring Line, The Land of Seven Wells, The Birds, The Number of the End, The Man in the Black Robe, The Prophet's Song, The Matrix of Years, The Day of the Lions, The Awakening of the Dragon, and much more.
The listener will discover the ancient scrolls that contain the appointed words that have determined the course of world history from the onset of modern times up to our day. The revelation is so big that it will involve and open up the mysteries of everything and everyone from Mark Twain to Moses, from King Nebuchadnezzar to Donald Trump, from the fall of empires to the rise of America, from a mystery hidden in a desert cave to another in an ancient scroll, from the palace of the Persian Empire to the US Senate, from the Summer of Love to the Code of Babylon, and much, much more.
Ultimately the Oracle will reveal the secret that lies behind end-time prophecy and the mystery of the end of the age.
As with The Harbinger and The Book of Mysteries, Cahn reveals the mysteries through a narrative. A traveler is given seven keys; each will open up one of seven doors. Behind each door lies a stream of mysteries. The reader will be taken on a journey of angels and prophetic revelations waiting to be discovered behind each of the seven doors - the ancient secrets that lie behind the world-changing events of modern times - and revelations of what is yet to come.
Hailed as a mind-blowing masterpiece, The Oracle will reveal mysteries that are absolutely real, amazing, stunning, mind-blowing, and life-changing.
Prepare to be blown away.
©2019 Jonathan Cahn (P)2019 Frontline


Review:
Jonathan has researched and gathered some absolutely amazing facts that tie the Jubilean mysteries together. He makes the extensive presentation through a story narrative of a man with visions who seeks an Oracle to help explain the meaning of the visions. The ‘traveler’ envisions seven doors and seven keys each with secrets that connect history (and His Story) to events in the 1800s, 1900s and all the way to modern years and anticipated future events.

My husband listened to the first portion with me, then I finished without him. (He is listening with the print book and taking a longer time.) While listening together we would share in comments like “Wow!”, “Amazing!” and “Remarkable!” These reactions continued for my listening through the end.

One example of details revealed is a surprising visit to Israel in 1867 by the American journalist Samuel Clemens (Mark Twain). He shared his reactions in his book The Innocents Abroad, published two years later. The place described in the Bible as once so lush appeared to him to be barren and dispiriting. He describes the land of Israel as “ ...[a] desolate country whose soil is rich enough, but is given over wholly to weeds-a silent mournful expanse....A desolation is here that not even imagination can grace with the pomp of life and action....We never saw a human being on the whole route....There was hardly a tree or a shrub anywhere. Even the olive and the cactus, those fast friends of the worthless soil, had almost deserted the country.”


22 Your children who follow you in later generations and foreigners who come from distant lands will see the calamities that have fallen on the land and the diseases with which the Lord has afflicted it. 23 The whole land will be a burning waste of salt and sulfur—nothing planted, nothing sprouting, no vegetation growing on it. It will be like the destruction of Sodom and Gomorrah, Admah and Zeboyim, which the Lord overthrew in fierce anger. [Empahsis added.]


Author Cahn reveals in The Oracle the significance of 1867 as a Jubilee year; then 1917, 1967 and 2017. All of it is just wonderful. I enjoyed even the future projections and the little twist at the end of the book. The book shares a long view of God's plan as set forth in His Word, the Bible, and reveals how God works to accomplish His promises and plans. I highly recommend this to all Christ-followers and to seekers! I hope every reader will be awed and find their lives changed by this material.

Audio Notes: Michael Beck does a wonderful job with the narration. It is not an action story but there is excitement and Beck manages to convey that. He also provides distinct voices for the handful of characters. I was fine with listening but I am glad we have a print copy to look at too.