This episode gripped me and had me listening hoping for better luck for the primary characters.
Southlands
Lee Harden, Book 2
By: D.J. Molles
Narrated by: Christian Rummel 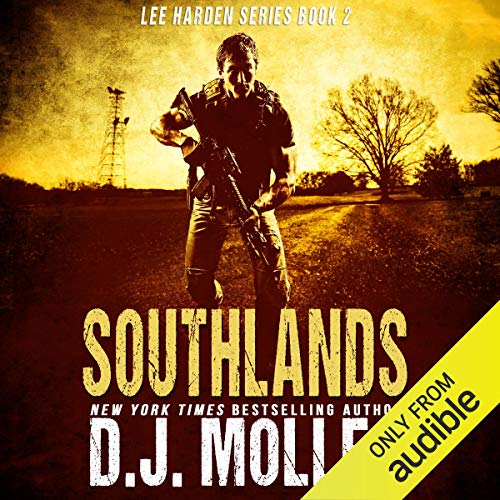 Publisher's Summary
After being sequestered to a bunker to recover from his wounds, Lee Harden is finally going topside with his fellow Project Hometown Coordinator, Terrence "Tex" Lehy. Lee wants to ally the UES with Texas, in order to combat the threat of a powerful oil cartel to the south. But Tex's methods raise serious questions, and Lee quickly discovers that Texas has its own set of problems.
In the Fort Bragg Safe Zone, the conflict with the Lincolnists is rapidly escalating. Master Sergeant Carl Gilliard has just returned, and he’s intent on destroying the Lincolnists, using whatever means are necessary.
Angela is caught in the middle, unable to reconcile her sense of civil morality with her desire for justice. One thing remains certain: before there is peace, there will be blood.
©2019 D.J. Molles (P)2019 Audible, Inc.


Review:
Lee Harden continues to struggle for freedom each day. He is off in Texas with Julia and Abe to pursue their current mission. They are meeting with fellow Project Hometown Coordinator, “Tex”, in the hopes of gaining the Texas military elements as allies to fight the threat of a powerful cartel to the south. Lee realizes that Texas has its own issues and struggles to take into consideration.

Meanwhile, the Lincolnists in the Fort Bragg Safe Zone are becoming more of a threat to the community. The elected president, Angela, is caught in the middle of military pressures and the rights being demanded by the rising group of rebels. She is leaning toward restraining the military as she tries to uphold ‘constitutional’ and civil rights.

Molles manages to provide strong characters and intense plot situation which keep me up too late listening. I was intensely invested in the events of this continuing story which were likely to lead to battle, blood, and loss. There were moments when I was shaking my head and clenching my fists suspecting a trap or betrayal and suspecting decision errors would lead to disaster. Now I am wondering how the characters I care about will continue to survive.

I initially thought book 3 wasn’t out yet but in checking, I am glad to see it is available. It is on my purchase list for series to continue. I recommend this series, starting with the Remaining series, to readers who like intense action with characters you become invested in. After all – who wouldn’t be concerned about whether the uninfected humans can survive and rebuild society while facing corrupt and power-hungry politicians, infighting rebel groups and external threats from evolving zombies?

Audio Notes: Christian Rummel continues to do a stellar job with the narration of the series. He provides unique voices that fit each of the characters. I totally enjoy listening to this series.

Here is a Link to my reviews of other books in the series.