There is lots of trauma and excitement in this originally planned trilogy conclusion! 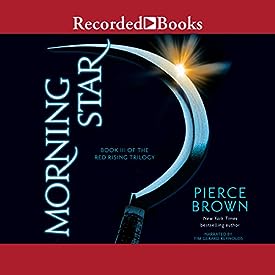 Publisher's Summary
Darrow would have lived in peace, but his enemies brought him war. The Gold overlords demanded his obedience, hanged his wife, and enslaved his people. But Darrow is determined to fight back. Risking everything to transform himself and breach Gold society, Darrow has battled to survive the cutthroat rivalries that breed Society's mightiest warriors, climbed the ranks, and waited patiently to unleash the revolution that will tear the hierarchy apart from within.
Finally, the time has come.
But devotion to honor and hunger for vengeance run deep on both sides. Darrow and his comrades-in-arms face powerful enemies without scruple or mercy. Among them are some Darrow once considered friends. To win, Darrow will need to inspire those shackled in darkness to break their chains, unmake the world their cruel masters have built, and claim a destiny too long denied - and too glorious to surrender.
©2016 Pierce Brown (P)2016 Recorded Books


Review: (Mild Spoilers)
In the opening chapters, Darrow suffers through mania during solitary captivity. He faces confusion and worse when the box is finally opened and he lies completely humiliated before his enemies, including former friends, now brutal enemy Jackal and mocking Cassius. Then to his surprise, he receives unexpected aid to escape.

Darrow is brought back to health to continue the heart-aching and dangerous rebellion. He still has a handful of friends at his side although some earlier friends have become enemies and it isn’t always clear who might still betray him. Through one near-death experience after another, he faces the continuing possibility that he will lose more friends as the war against the better-equipped Golds escalates.

There are moments of great suspense and sorrow with small triumphs that bridge into the next stage of bitter, gruesome deprivation that accompanies war. Darrow will have to inspire several other levels of society, many slaved Obsidians, Pinks, and Blues, to support the challenge for equality if he wants a chance to win for his own people, the oppressed Reds.

The characters are well developed and wonderfully complex. There is terrible, twisted evil and some surprises. I totally enjoyed the suspense, intrigue and even the dark trauma in this story. Originally this was to be the conclusion but there are two additional books that have been added to the series. My son indicated that I don’t have to start those right away but I was very glad to read/listen to this one while we were visiting as he was eager to share the excitement with me. I highly recommend the first three books for fans of dystopian fantasy.

Audio Notes: Tim Gerard Reynolds does an amazing job with the narration. He captures the complex characters and gives them voices that fit their personalities. It is a rich listening experience.