I like search dog stories and this has good suspense with a nice side of romance.
Lone Wolf, F.B.I. K-9, Book 1
By: Sara Driscoll
Narrated by: Angela Dawe 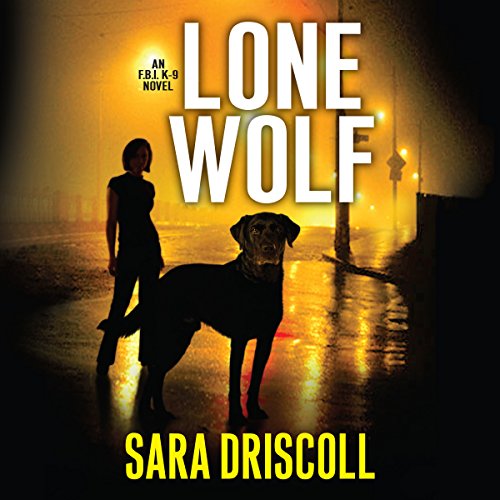 Publisher's Summary
In the first book in a thrilling new series, FBI Special Agent Meg Jennings and Hawk, her loyal search-and-rescue Labrador, must race against time as they zero in on one of the deadliest killers in the country....
Meg and Hawk are part of the FBI's elite K-9 unit. Hawk can sniff out bodies anywhere - living or dead - whether it's tracking a criminal or finding a missing person. When a bomb rips apart a government building on the National Mall in Washington, D.C., it takes all of the team's extensive search-and-rescue training to locate and save the workers and visitors buried beneath the rubble.
But even as the duo are hailed as heroes, a mad bomber remains at large, striking terror across the Eastern seaboard in a ruthless pursuit of retribution. As more bombs are detonated and the body count escalates, Meg and Hawk are brought in to a task force dedicated to stopping the unseen killer. But when the attacks spiral wide and any number of locations could be the next target, it will come down to a battle of wits and survival skills between Meg, Hawk, and the bomber they're tracking to rescue a nation from the brink of chaos.
©2016 Sara Driscoll. (P)2016 Brilliance Audio, all rights reserved. Scripture quotations taken from the New American Standard Bible®, © 1960, 1962, 1963, 1968, 1971, 1972, 1973, 1975, 1977, 1995 by The Lockman Foundation. Used by permission. (www.Lockman.org)


Review:
Meg, a former cop, and her trained Labrador, Hawk, are part of an FBI elite K-9 search and rescue team. Meg and her sister are active in rescuing dogs and training them for service use or just to be well behaved companions. The K-9 team is called in when a bomb traps people under the damaged Department Agriculture building. There were children visiting when the bombing occurred, so the K-9 team is desperate to locate survivors. Meg and Hawk work closely with firefighter, Todd Webb, to save an injured girl.

The search work is exhausting and a reporter happens to capture an image of Meg and Hawk after she leaves the site and collapses on a bench trying to recover her equilibrium. The photo angers the bomber as it takes focus away from his actions. He emails the reporter, Clay McCord, expressing his anger and intent to continue.

Meg is suspect of Clay’s connection with the bomber and makes an effort to meet him. They are meet at a dog park and set up a tentative agreement to share information. The bombings continue with horrendous consequences. Meg, Hawk and her team continue to pursue clues while Clay shares what information he can.

The disgruntled bomber escalates his attacks and Meg’s involvement may make her a personal target. The race is on for the FBI to locate the bomber before he can complete another major attack.

There are applicable search terms highlighted at the beginning of each chapter which I found interesting. I enjoyed the skills of Hawk as a search and rescue and attack dog. There is a strong bond with Meg as Hawk’s handler and the author shares emotional background resulting from Meg’s loss of a prior dog. Meg is a good character although I was a little surprised by the depth of her own anger. I like the connections with Clay and Todd which give the chance for further development in the series.

The story is fast-paced and moves along easily. I would get more books in the series. I recommend it to readers who like mysteries and K-9 elements.

Audio Notes: Angela Dawe does a fine job with the narration. She is able to give both the femail and male characters their own voices. I settled in and enjoyed the listen.