I have mixed reactions to this.
The Handmaid's Tale
By: Margaret Atwood
Narrated by: Claire Danes 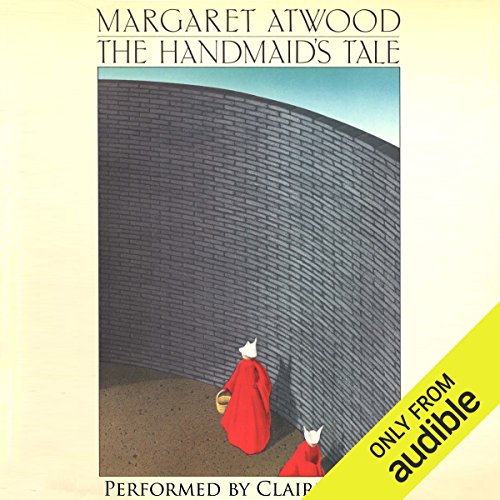 Publisher's Summary
Audie Award, Fiction, 2013
Margaret Atwood's popular dystopian novel The Handmaid's Tale explores a broad range of issues relating to power, gender, and religious politics. Multiple Golden Globe award-winner Claire Danes (Romeo and Juliet, The Hours) gives a stirring performance of this classic in speculative fiction, one of the most powerful and widely read novels of our time.
After a staged terrorist attack kills the President and most of Congress, the government is deposed and taken over by the oppressive and all-controlling Republic of Gilead. Offred, now a Handmaid serving in the household of the enigmatic Commander and his bitter wife, can remember a time when she lived with her husband and daughter and had a job, before she lost even her own name. Despite the danger, Offred learns to navigate the intimate secrets of those who control her every move, risking her life in breaking the rules in hopes of ending this oppression.
Cover Art by Fred Marcellino. Used with permission of Pippin Properties, Inc.
Explore more titles performed by some of the most celebrated actors in the business in Audible’s Star-Powered Listens collection.
©1985 Margaret Atwood (P)2012 Audible, Inc.


Review:
Before she was named Offred (her non-identity name), she used to have a job, a husband and a child. One day all the working women were fired, their funds frozen and given into the control of a male. Fearing their child will be taken away, her husband and she tried to sneak out of town with their child. They are caught and separated.

Now Offred is part of the first generation of women who are relegated to certain limited tasks: society spouse of a privileged leader, housekeeper (a ‘Martha’), a housemaid, a handmaiden to serve as a surrogate to birth children for the society women, or a unwoman sent to struggle to survive in the colonies. Offred has had a healthy child and is young enough to have more so she is assigned to be a handmaiden.

She is moving into a new family with a high-ranking Commander and his wife. She hopes they will be nice but instead finds he is taciturn and the wife is bitter, most likely jealous. If Offred can become pregnant all will be pleased and she will secure her future. If she does not become pregnant then she may become an unwoman.

Offred’s trauma and confliction are understandable since she lived in a free America before the violent overthrow. She struggles not knowing what has happened to her family and her best friend. Slowly she learns about a quiet underground rebellion but how can she know who to trust? There are plenty of secret lives behind the public ones and Offred becomes embroiled in the secrets despite the great risks. The intrigues build until an anticipated unmasking that comes with twists in the final consequences.

The tasks of women in this society seemed to be justified by twisted views from biblical teachings, however, it is never explained how these views became so skewed. The story presents some moral dilemmas which are thought-provoking. It is engaging although difficult emotionally. Reading the book blurb gives a quick history of the government overthrow which I don’t recall being explained until the informative Historical Notes which is basically the epilogue.

I was pulled in from the start by the beautiful writing prose. The story is focused on Offred and Atwood builds a strong conflicted character. However – apparently intentionally -- Atwood fails to fill out where the society goes. It isn’t clear what happens to Offred, much less the rest of the women in this horrible world. I was disappointed by all of the questions left unexplained at the end. It isn’t clear to me that Offred’s story is wrapped up in the sequel. I’m not sure how to recommend this except to say that it is a dark dystopia and many readers really liked it.

Audio Notes: Claire Danes’ superb narration enhances this unhappy tale. She delivers the work as though she is there reading, if not writing, the thoughts. The emotional delivery captures the depression and repressed anger and frustration. I am glad that I listened to this to this and do recommend the audio if you are planning to read this.