This ghostly thriller brings some soul searching.
The Letterbox
by Layton Green 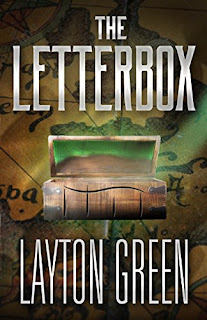 What if you had the chance to uncover tangible evidence of the divine? How far would you go, what dangers would you brave, in pursuit of the greatest mystery of all?
Four companions of varying beliefs, on a journey to the forgotten corners of Europe, are about to find out.
On a desolate English moor, a team of scientists unearths a two-thousand-year-old wooden box, preserved in silver and inlaid with a map of patterned gemstones. A set of runes inscribed on the box claims the map is a pathway to God.
In an attempt to decipher the map, a wealthy New Orleans collector assembles an unlikely team: a specialist in cultural antiquities who dabbles in the occult; a jaded attorney searching for meaning; a brilliant linguist who loathes organized religion; and a Catholic historian with a reputation for acquiring pieces no one else can or will.
Shackled by secrets and hidden motives, pursued by a sinister religious order, driven by an insatiable desire for answers, the four companions trek across Europe as they search for a connection among the ancient sites revealed by the map. As the hunt for truth takes them deeper into the unknown, their lives and perhaps their souls in peril, they must determine whether the letterbox is part of an elaborate, centuries-old deception—or the answer to mankind’s ultimate questions.
From critically acclaimed and bestselling author Layton Green, The Letterbox is a thrilling new mystery that weaves danger, exotic locales, breathless suspense, romance, and ancient secrets into the tapestry of an unforgettable novel.


Review:
A unique artifact is found on a desolate English moor. A wealthy New Orleans collector, Lucius, is hired to retrieve the letterbox and investigate its origins and purpose. The collector calls in a brilliant linguist, Lou, an atheist, who drags along his best friend, Aidan, an attorney who is disgusted with his work and seeking some greater meaning to life. Lou determines that runes on the box may be interpreted as the “God path”. Not all the writing and mosaic work on the box matches the described or expected setting and historic time which adds to the puzzle. Lucius’ assistant, Asha, who dabbles in the occult, joins the team and they head off to Dubrovnik to pick up the team guide, Jake, a Catholic historian skilled in collecting, and protecting, rare pieces.

The four are quickly drawn in and committed to the search by individual drives and secret motives. Even as strange visions, ghostly apparitions, threatening druids and dangers stalk them across Europe, they cannot let go of the quest. Will the map lead them to a hidden treasure, druid secrets concealed centuries ago, or an encounter with God? It is a quest that may steal their lives if not their souls.

This is a fascinating mystery guided by a puzzle that might have readers thinking of The Da Vinci Code while the quest is reminiscent of a modern day Indiana Jones adventure traveling to spiritually rich sites. The history, action and danger of the quest are engaging, but I was anxious to discover the end result. I found the four varied reactions to the revealed ending to be consistent with their beliefs and preset attitudes, which provides an interesting psychological argument.

The writing is strong with unique and well researched settings. The story is told from Aidan's view which worked well since he is the one seeking meaning without a preset belief system. I recommend this as engaging reading to those who like a puzzling thriller with a touch of soul searching.


I received this from the author for an honest review.
Posted by Martha Eskuchen at 6:16 PM