This is an engaging sci fi - character profile.
Of Treasons Born
A Novel of the Treasons Cycle
By: J. L. Doty
Narrated by: Noah Michael Levine 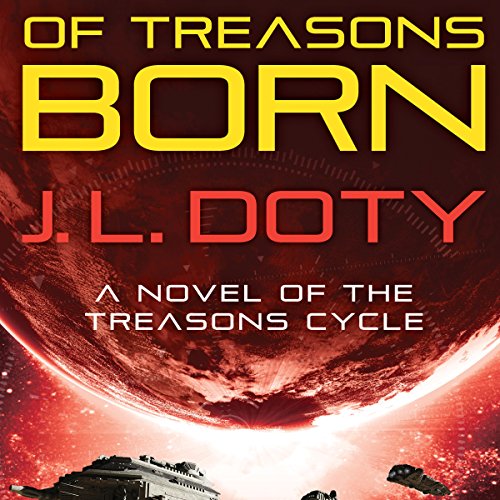 Publisher's Summary
A gripping military science fiction adventure starring the hero of A Choice of Treasons.
As a lifer in the Imperial Navy fighting in a war that has lasted for generations, York Ballin's only hope for an honorable discharge is the grave. But what events led up to his reluctant enlistment? What spawned York's almost fanatic loyalty to his friends - and his doubts regarding the imperial uniform he once wore with such pride?
York rarely recalls his childhood, which began with a mystery and ended at age 11 when he was given a harsh choice: Join the navy or face certain death on a prison asteroid. The navy has its own code of justice, but a youngster with curiosity and grit is able to rise in the ranks...if he's given a fair shot.
A few rigorous years later, as a newly commissioned ensign, York is assigned to the hunter-killer ship The Fourth Horseman. But when an unexpected foe kills his superior officer and leaves the crew stranded in enemy territory, the young ensign must do whatever he can to save the ship - even if it means he'll be court-martialed for treason.
Of Treasons Born is a novel of the Treasons Cycle; the series was written so that it can be listened to in any order.
©2016 J. L. Doty; published in 2016 by Open Road Integrated Media, Inc. (P)2016 Audible, Inc.


Review:
York Ballin was mostly raised on the streets. He was pressured by the wrong sort of friends and at age 11 he ended up with a conviction for murder. He is sentenced to a prison asteroid where he will no doubt be dead soon. He is surprised when he is confronted by naval officers who “offer” him a place in the space navy. It isn’t really a choice.

York has to start at the bottom swabbing floors – he learns they are called ‘decks’. He is smart and picks up quickly… if only someone is willing to train him. He learns that there are bullies in the navy too and he ends up caught in a bad situation again. He takes the punishment and is sent to the Marines for further discipline. They figure he is a loser who will wash out but soon discover that he learns quickly and is willing to take risks for others. Bit by bit York makes friends and shows himself as more than a loser.

He is sent to Naval Academy where he bunks with three others of totally different backgrounds. One comes for power, one from money and one from influence. They realize that York is the one from experience. There are superiors who feel that street kids have no business in the Academy – they aren’t smart enough to learn and not worthy of the training. These men make trouble for York but fortunately there are others who see the potential for leadership in York and want him to succeed.

I found this story very engaging. I liked how Doty develops York’s character and how friends and staff along the way contribute to that character. York is a sympathetic character who is able to rise through the ranks even when he doesn’t even know what the space war is all about. There is a suitable balance between the strong action and human elements. I have the next book in the series (although this was actually shown as book 2) and I am looking forward to reading/listening to more. I recommend this to fans of space military tales.

Audio Notes: Noah Michael Levine does a great job on the narration. The voices are varied and the inflections are conveyed to share the nuances of the situations. I really enjoyed the listen.


I picked this from my Audible Library. It qualifies for Mount TBR and Audio Challenge.
Posted by Martha Eskuchen at 11:33 PM