This is a fun action tale. 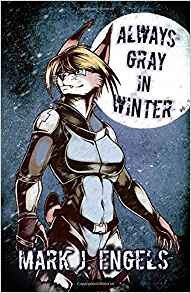 A distant daughter. A peculiar device. A family lineage full of secrets. When werecat Pawlina Katczynski finally resurfaces, her location previously unknown to anyone close to her, the reunion is short of welcomed. Instead, she finds herself thrust tooth and nail—tooth and claw—into a feud between opposing werecat clans as her family and their enemies reignite a battle that has raged for years. Always Gray in Winter invites the reader to join the feud and see if blood is truly thicker than water...


Review:
Werecat Pawlina and friends had left the service after a disastrous ambush. Lenny, her romantic interest, was traumatized by the brutal, strange attack. He isn’t aware of Pawly’s secret. Pawly was sure that she would bring more trouble on family and friends so to protect them, she took off on her own and went under the radar. She resurfaces in a battle with another young woman whose speed and agility surprise even Pawly. Several friends and her brother show up and kidnap her to get her home.

Meanwhile, her opponent, Hana, returns to her handler/”Papa”, Mawro, on ship. They are out to capture a mysterious invention that has been designed to help others of their kind – humans who appear as werecats in their aliuran form.

Pawly and her family travel to Europe to rescue their inventor relative when they hear about the attack on him. Along the way they run into two government agents, one of whom is Lenny. He is shocked and dismayed to finally see Pawly again.

Pawly’s Polish clan and Mawro’s North Korean clan clash and face off on opposite sides while trying to keep their presence a secret from the humans. They do have a few friends who have become family or work allies who help to keep the secrets.

I enjoyed the characters and the fast-paced action with fights and near escapes. There are some political and strong military elements. The story moves along well although the differences are not made totally clear. The author uses flashbacks to show the history of the two families but I still had some confusion as to the motivations.

I often listen to ebooks on my 2nd generation Kindle. The difficulty I had in this read is that there is no noticeable break between scenes. I checked the sample available at Amazon and it shows a space between the scenes. This is only reflected as a paragraph symbol for the version I read.

This did remind me of an anime, which was the intent of the author. I recommend this as a fun read to readers who like anthromorphic action sci fi.

I received this from the publisher through NetGalley. It qualifies for my NetGalley Challenge. I read this during #hohohorat and also for #RRSciFiMonth.
Posted by Martha Eskuchen at 8:05 PM