This story is very engaging, Biblically based, and I want to continue the series.
Apocalypse: The Days of Elijah, Book 1
By: Mark Goodwin
Narrated by: Kevin Pierce 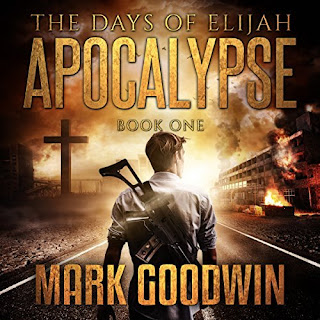 Publisher's Summary
After a massive wave of disappearances, 26-year-old CIA analyst Everett Carroll finally believes what he's been told about the biblical prophecy of the rapture. But will he be able to survive the gauntlet of destruction known as the Great Tribulation? Seven seals, seven trumpets, and seven vials of God's wrath are about to be poured out upon the earth, and woe to the inhabitants thereof! Global currencies have collapsed, famine and plague have claimed the lives of millions, and the world has crumbled into chaos. The only reason Everett and his girlfriend, Courtney, have survived the mayhem is because they were warned by John Jones, Everett's recently deceased boss, that all of these tragedies would occur. And what's more, through his inside knowledge at the agency, mixed with his interpretation of prophecy, Jones predicted that a world leader would ride in on a white horse to fix the ills of the planet. But who is this leader and what is his motivation for mandating the new identification implant and the global cashless currency?
Everett is surprised when he finds out that Elijah, the Messianic Jewish hermit who lives on the mountain above their retreat, did not disappear along with the rest of the Christians. When he tells Everett of a special mission that God has given him, the old prophet gives Everett more questions than answers.
This is the highly-anticipated follow-up series to the best-selling trilogy, The Days of Noah, which chronicles the economic, moral, and social collapse of the United States.
As with all books by Mark Goodwin, this book contains no profanity and no embarrassing sex scenes. However, if you're offended by conservative principles and references to scripture, this book might not be for you.
©2016 Goodwin America Corp. (P)2017 Goodwin America Corp.


Review:
Everett is a 26-year-old CIA analyst whose boss, John Jones, slowly convinced him to prepare for a collapse of society as we know it. Everett and his girlfriend, Courtney survived the collapse with the help of Jones’ advice and in the safety of the cabin Jones left to them. Another couple was sharing the responsibilities of survival preparedness and watch until one morning they disappeared… along with many other unexplained disappearances around the world.

The new government and the new world religious leader provide a strange tale of alien abductions to explain the disappearances. Even this bizarre story was predicted by Jones so Everett and Courtney are even more convinced that his conspiracies theories are more fact than fiction.

Everett and Courtney are a bit surprised to learn that the old Messianic Jewish hermit, Elijah, who lives up the hill, did not disappear with the other Christian believers. But Elijah explains he is waiting to fulfill a special mission and, in the meantime, he encourages the couple to believe and get right with God. Then God can be their biggest ally in the earthly battles.

Everett reaches out to another couple who he knows were underground resisters of the new marking and commerce system. The new couple joins them at the cabin and they begin to strategize how to acquire and store enough supplies to last the next seven years that is expected to be turmoil and oppression, especially for those who refused to accept the mark under the new government. There are dangers ranging from local thieves to government authorities when they travel to the city so that Elijah can confront one of the leaders, and finally nature itself presents its own mix of troubles in fires, landslides and earthquakes.

The “apocalypse” theme is not new but I enjoyed the characters and how the trials and disappearances played out in their lives. There is a good blend of action and theological argument. I also liked the prepper, survival elements. I enjoyed the first book in the trilogy, The Days of Noah, the series where Everett and Jones are first introduced. Although this picks up in time after the trilogy, there is a summary and enough fill in of the backstory so I didn’t feel like I missed too much. I do want to continue the story from here to keep track of the characters and their struggles to survive. I recommend this to readers who enjoy apocalyptic stories with a Biblical foundation and no foul language.

Audio Notes: Kevin Pierce does a fine job with the narration. He gives the characters distinct sounds and portrays the personalities set by the author. I really enjoyed listening to this in audio.


I selected this story with an Audible Credit in April 2017. This adds to my Audio Book Challenge.
Posted by Martha Eskuchen at 10:14 PM