This is an engaging, character intensive SHTF story; I enjoyed the characters and the premise.

Fight like a Man: A Post Apocalyptic Thriller
The SHTF Series, Book 1
By: L. L. Akers
Narrated by: Kevin Pierce 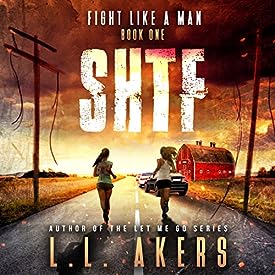 
Publisher's Summary
As a prepper, Grayson Rowan was prepared for almost anything.
...anything other than being totally alone when the sh*t hits the fan.
While he sat back and watched the United States rattle swords with Korea, play chicken with Russia, and strong-arm China, he felt sure if the lights went out that he and his family would be ready and safe - whether it was due to a natural disaster or a man-made event. They had everything they needed at their homestead.
What he wasn't prepared for was his family not being home if it ever happened.
Olivia Rowan is with her sisters, Gabby and Emma, on a girls-only trip to Myrtle Beach. When chaos erupts and there's no gas, their journey home is a nightmare, filled with predators and danger - and apparently, Olivia hadn't learned a thing her husband tried to teach her.
When your neighbors run out of water and turn on each other, what will you do?
Jake, a country boy mechanic, never believed in TEOTWAWKI, but he'd heard his brother-in-law preach about it many times. He knew what to do, but he didn't prepare. He lazily left it all up to Grayson - he was the prepper after all. When catastrophe strikes, will he continue to keep his head stuck in the sand while his clueless neighbors destroy each other, and his wife is stuck out on the road, or will he stand up and fight like a man?
And if you're alone? Bug in or bug out?
Graysie Rowan, a freshman at university, just wants to go home. When no word comes from the government, and the state capital is overrun with looters, chaos, and mayhem, the college administration puts the students on lockdown. But her dad, Grayson, had prepared her for this. Now, if she can only remember what it was he said to do....
If they want to survive this post-apocalyptic event, they'll all have to learn to fight like a man.
©2017 Lisa L. Akers (P)2017 Lisa L. Akers


Review:
Grayson, a firm prepper, is the ‘patriarch’ of his family and has prepared the family farm so everyone will be taken care of. Although the rest of the family have agreed to prep and the rendezvous plans, they don’t take the threats as seriously as Grayson does. They are all startled … and unfortunately separated… when the grid goes down. Grayson is home alone since his wife and sisters-in-law are 200+ miles away for a girl’s weekend at the beach. His daughter is an hour away at college.

Jake, one of the brothers-in-law, a mechanic, has been experiencing some funky mood that he’s been trying to hide from everyone. He hasn’t had much motivation and it takes him a little time to accept that a SHTF event has occurred. He still doesn’t take the steps he knows need to be done and drags his feet getting on the road to the family farm. Plus he remembers that he got lax on some of the tasks he was supposed to take care of. When he finally gets ready to go he runs into one problem after another.

Grayson’s wife, Olivia, is enjoying the beach with sisters Gabby and Emma. Olivia loves her husband but never really bought into the prepper mode. As the beach resort descends into chaos, Olivia plays ostrich and hides her head in a book on the beach. Gabby is ready to move out and try to get home but is rightfully upset when she discovers she is the only one with her bug out bag. The girls are extremely vulnerable as they try to find a ride home and begin to run into some dregs of society.

Graysie is a freshman at college who is stuck with her clueless roommates. University authorities have told the students to stay put. But after several days, as conditions deteriorate, Graysie decides she is going to get past the security guard to her car and head home.

Everyone may have to "fight like a man" as Grayson has tried to teach them. The story follows all four threads with the fears and dangers the characters face as technology, normalcy and society break down around them. The characters evoked various emotions: curiosity, annoyance, anger, dread, fear, and relief. There are some political statements which didn't bother me but sadly there is unnecessary bad language. There are a few alarming scenes that are consistent with an EOTW scenario. I liked the prepper information, including what could go wrong with the best of plans. I am interested in continuing the series.

Audio Notes: Kevin Pierce has become a reliable sci fi narrator. He doesn’t always provide completely unique voices but he still manages to convey the distinct personalities. The narration enhanced my enjoyment of the story and I hope to continue listening to the series on Audible.


I received this from the narrator for an honest review. It qualifies for my Audiobook Challenge.

This was my first read/listen in November for 2017 #RRSciFiMonth.

Posted by Martha Eskuchen at 10:17 PM