I enjoyed the plot and character interaction in this addition to this highly entertaining series. 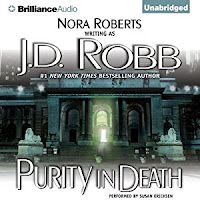 Publisher's Summary
Louie Cogburn had spent three days holed up in his apartment, staring at his computer screen. His pounding headache was unbearable - like spikes drilling into his brain. And it was getting worse. Finally, when someone knocked at his door, Louie picked up a baseball bat, opened the door, and started swinging...
The first cop on the scene fired his stunner twice and Louie died instantly. Detective Eve Dallas has taken over the investigation, but there's nothing to explain the man's sudden rage or death. The only clue is a bizarre message left on his computer screen: Absolute Purity Achieved.
And when a second man dies under nearly identical circumstances, Dallas starts racking her brain for answers and for courage to face the impossible... that this might be a computer virus able to spread from machine to man....
©2013 J. D. Robb (P)2013 Brilliance Audio, Inc.


Review:
Eve begins a new investigation when called to the scene of a brutal killing. The killer was violently bludgeoning his neighbors with a baseball bat. Officer Trueheart took a few hits before he shot the man to stop him. The investigation quickly reveals that the killer, Louie Cogburn, was a sleaze bag criminal who spent hours on the computer which held the last message on the screen: “Purity has been achieved.” The case expands as more computer deaths are called in with the same screen message.

Eve pulls together her core team - Peabody, McNab, Feeney, and her husband, Roarke, as a civilian consultant - and begins the hunt for the Purity terrorists. News reporter Nadine adds to the tension and psychiatrist/profiler Dr. Mira steps in to help calm things when needed and even zany Mavis has a surprise to offer.

As usual, I enjoyed the well laid out plot and the teams work to get the conspirators. There is a nice blend of human life in this story as Eve deals with injured officers and shows a bit of the warmth and caring that lies hidden but fuels her drive to be a cop for the people.

The only thing I didn’t care for in this book was it seemed to be filled with anger. It opens with frustration and annoyance enhanced by the heat of summer. There is a lot of shouting and I was thankful for Roarke stepping in at times with his cool confidence that helps to center Eve.
I recommend this highly entertaining series to mystery lovers who like a tough female cop with great sidekick characters.

Audio Notes: Susan Ericksen does her usual superb job of narrating these characters. I think the angry/heat tone was part of the story and Susan captured it in the narration… for good or bad. Her voices are filled with personality and it makes listening to the series that much more enjoyable.


This is from my Audible TBR and qualifies for Mount TBR and Audio Challenge.
Posted by Martha Eskuchen at 11:28 PM