I did enjoy this complex, Christian military suspense

Crown of Souls
by Ronie Kendig 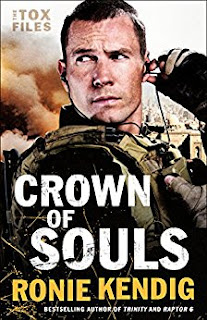 "Kendig has out done herself."--RT Book Reviews on Conspiracy of Silence
Six months after stopping a deadly plague, Cole "Tox" Russell and his team are enjoying a little rest. That peace is short-lived when a sniper shot hits Tox. The enemy is discovered to be one of their own, a rogue Special Forces team operator.
Alec King is perhaps the only person as skilled as Tox, and he's out for justice. Furious with orders that got his men killed, he intends to make those responsible pay. And he insists Tox join him, believing they are the same breed of soldier.
Afraid his old friend is right, Tox battles a growing darkness within himself as he and his team engage in another deadly encounter with antiquity. It appears Alec is cheating--he's using a mysterious artifact, a crown that history has linked to some of the worst slaughters in humanity. Racing to stop Alec before his vengeance is unleashed, Tox must fight the monster without becoming one.


Review:
Cole’s nickname is “Tox”, short for Toxic, because of his past. Even though he has proven himself in his successful service to his country, there are memories that he hasn’t let go. His name has been cleared of an accusation, but that doesn’t help a lot since the public, including his parents, believe he is dead. He continues to operate with a special ops team under instructions of selected superiors.

The team is enjoying some down time and Tox is spending time with Haven, a woman who loves him and brings light to his life. He doesn’t feel worthy of her and thinks she will hate him if she ever finds out about his past secrets. A sniper shot takes Tox in the shoulder and at first it isn’t clear if the shot was meant for him or Haven. The investigation reveals that the bullet was a message from an old friend and prior team member, Alec.

Soon they discover that Alec has gone rogue and is on a vendetta to destroy men who were enemies of the state and those who obstructed their capture in the past. Further investigation shows that it is not just Alec having gone off the deep end, but apparently he is using an ancient relic, a crown, that is corrupting his mind. The team must find a way to stop Alec before he kills those Tox loves, and many more. Just as importantly, they must get control of the crown so it doesn’t fall into the hands of anyone else.

Ms. Kendig creates a rather involved, complex plot that moves from present day danger to the legend of the crown in ancient, 1170AD Syria. The first jump back in time was a bit confusing but then it became apparent that the author was establishing the history of the crown and the Christian Knight whose mission was to retrieve it. I enjoyed the history and it added to the mystery to be unraveled by Tox and his team.

One problem I had was the author’s inconsistency in us of character names. In one paragraph Tox might be referred to as Tox, Cole and/or Russell. There were other characters where this occurred too and it was confusing to follow especially since I was letting Kindle read to me.

I found the mystical legend to be an interesting vehicle from a Christian author. I am not totally settled on how I feel about the supernatural elements in the story. I have the sense that reading the earlier book in the series may have made this a little easier to follow. Still, I like Ms. Kendig’s strong, intense writing style. I enjoyed the comradery and loyalty of the team, the tension in the romance and the danger and suspense of the plot. I would recommend this to readers who enjoy military suspense with romantic and supernatural elements.


I received this through NetGalley and it qualifies for my NetGalley Challenge.
Posted by Martha Eskuchen at 10:35 PM