I really enjoy this Alternate History Series with its strong character, lots of action and adventure.
Blood in the Water: Destroyermen Series
Book 11
Written by: Taylor Anderson
Narrated by: William Dufris 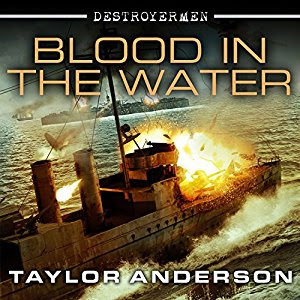 Publisher's Summary
Ever since the USS Walker came from another world war to defy the terrifying Grik and diabolical Dominion, Matt Reddy and his crew have given their all to protect the oppressed Lemurians. But with the Walker in desperate need of repairs just as the Grik's first general is poised to strike, Reddy is desperate.
With more enemies than ever before arrayed against them, the crew of the Walker needs new allies. That means combing the lethal wilds of Madagascar to find the Lemurians' fabled ancestors as well as the enigmatic dwellers east of the Pass of Fire. But what Reddy's crew unearths may be more than they can handle - discoveries so shattering that they could tilt the balance of the war in either direction.
But Reddy's greatest adversary is from his past: a madman named Kurokawa whose single-minded mission of revenge will shake the Alliance to its core and raise the stakes to the most personal and terrifying levels Reddy has ever faced.
©2016 Taylor Anderson (P)2016 Tantor


Review:
This is book 11 of this engaging alternate history series. The story follows the adventures, and continued battles, of WWII destroyer, the USS Walker, and its enemy, the Japanese battlecruiser Amagi. Both ships were pulled by a storm into a different Pacific Ocean. In this alternate Earth, the continents are populated by giant lemur-like beings known as Lemurians, and their brutal, cannibalistic enemy, the lizard (or dinosaur)-like Grik.

The Americans, led by Captain Reddy, have trained the peaceful Lemurians so they can defend themselves against the Grik. The Lemurians are now busy building new ships, planes and weapons for the upcoming battles.

During the battles and explorations of their new surroundings, they have discovered that various ships from other countries and years of our history have been pulled into this alternate world. There are British, Spanish, German, French and more.

At this point Captain Reddy and the Alliance are spread out on numerous fronts. There is a group pursuing the wicked Dominions, while other groups are out seeking aid from ancient Lemurian tribes. Some ships are moving into position for the next battle and one ship has been sent out to explore beyond the explored lands. A new player has entered the local field, a coalition known as the League of Tripoli. The Alliance members don’t know if the League are friend or foe, but their actions in this episode will set them at odds with Captain Reddy.

The previously barbaric and drone-like armies of the Grik have begun to change and learn with the help of the Japanese and from the battles they have been engaged in. This is creating dangers for the Alliance but also creating interesting tension within the Grik forces. Meanwhile, the mad Japanese commander, Kurokawa, has a ship to replace the Amagi, and he is making his own plans for revenge.

The story follows at least seven threads of characters. There are battle scenes but also there are scenes of preparation, exploration and confrontation. I was glued to my earplugs to learn what would happen with each team. I enjoy the character interactions and am finding the growth of the Griks, especially General Halick, interesting. Once again I am impressed with Mr. Anderson’s wonderful imagination. I am glad I already have book 12 in my Audible library. I highly recommend the series, and the audios, to readers who enjoy alternate history and battle stories with well-developed characters.

Audio Notes: William Dufris does his usual great job of narration. He manages all the numerous character voices, accents and nuances, so the story becomes alive. I love listening to this series on audio.

Check out the artwork, plane models, maps and ship silhouettes at the author's new Website. (The website was down when I checked but hopefully will be back soon.)

Also check out my prior reviews:


I had this title in my own Audible library (credit purchase in 2016). It qualifies for Audio Challenge and Mount TBR Challenge.
Posted by Martha Eskuchen at 9:58 PM